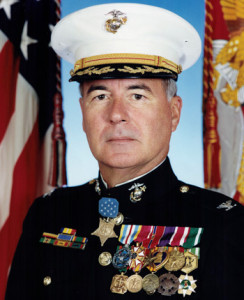 For conspicuous gallantry and intrepidity at the risk of his life above and beyond the call of duty. When the company was suddenly pinned down by a hail of extremely accurate enemy fire and was quickly separated from the remainder of the battalion by over 500 meters of open and fire-swept ground, and casualties mounted rapidly. Lt. Barnum quickly made a hazardous reconnaissance of the area, seeking targets for his artillery. Finding the rifle company commander mortally wounded and the radio operator killed, he, with complete disregard for his safety, gave aid to the dying commander, then removed the radio from the dead operator and strapped it to himself. He immediately assumed command of the rifle company, and moving at once into the midst of the heavy fire, rallying and giving encouragement to all units, reorganized them to replace the loss of key personnel and led their attack on enemy positions from which deadly fire continued to come. His sound and swift decisions and his obvious calm served to stabilize the badly decimated units and his gallant example as he stood exposed repeatedly to point out targets served as an inspiration to all. Provided with 2 armed helicopters, he moved fearlessly through enemy fire to control the air attack against the firmly entrenched enemy while skillfully directing 1 platoon in a successful counterattack on the key enemy positions. Having thus cleared a small area, he requested and directed the landing of 2 transport helicopters for the evacuation of the dead and wounded. He then assisted in the mopping up and final seizure of the battalion’s objective. His gallant initiative and heroic conduct reflected great credit upon himself and were in keeping with the highest traditions of the Marine Corps and the U.S. Naval Service. [custom_frame_right

H.C. “Barney” Barnum was born on July 21, 1940, in Cheshire, Connecticut. He was commissioned a 2d Lt in the U.S. Marine Corps, in June 1962. Lt Barnum served with the 3rd Marine Division on Okinawa from February 1963 to April 1964. His next assignment was with the 2nd Marine Aircraft Wing at MCAS Cherry Point, North Carolina, from April 1964 to March 1965, followed by service as Guard Officer at Marine Barracks, NB Pearl Harbor, Hawaii, from March to December 1965.

Lt Barnum deployed to Southeast Asia in December 1965, and served as an artillery forward observer with Co. H, 2nd Battalion, 9th Marines, 3rd Marine Division, from December 1965 to June 1966, followed by service as Operations Officer, Hawaiian Armed Forces Police, from June 1966 to March 1967. Capt Barnum served with Headquarters U.S. Marine Corps in the Pentagon from September 1967 to October 1968, and then returned to Vietnam, where he served as commander of Battery E, 2nd Battalion, 12th Marines, 3rd Marine Division, from October 1968 to October 1969. He served as a weapons instructor with the Basic School at Quantico from November 1969 to August 1971, and then attended the Amphibious Warfare School at Quantico from August 1971 to March 1972. His next assignment was as Operations Officer and then Executive Officer with the 2nd Battalion, 10th Marines, 2nd Marine Division, at Camp Lejeune, North Carolina, from March 1972 to June 1974, followed by service on the staff of the 2nd Marine Division from June 1974 to June 1975. He attended Army Command and General Staff College at Fort Leavenworth, Kansas, from June 1975 to June 1976, and then served as the Fire Support Coordinator for the 9th Amphibious Brigade of the 3rd Marine Division, and then Regimental Inspector for the 12th Marine Regiment, from June 1976 to September 1977.

Col Barnum commanded Headquarters Company, Recruit Training Regiment, Marine Corps Recruit Depot, Parris Island, South Carolina, from September 1977 to May 1979, and he then commanded the 2nd Recruit Training Battalion from June 1979 to March 1981. He served as Depot Inspector at Parris Island from March to July 1981, followed by Naval War College at Newport, Rhode Island, from July 1981 to June 1982. His next assignment was with the Host Nation Support Branch Logistics Directorate of the Rapid Deployment Joint Task Force (redesignated U.S. Central Command in January 1983) at MacDill AFB, Florida, from June 1982 to May 1983, followed by service as Chief of the Current Operations Division, Operations Directorate for USCENTCOM from May 1983 to August 1985. Col Barnum served as Deputy Director of Public Affairs with Headquarters U.S. Marine Corps from August 1985 to July 1986, and then served as Director of the Special Projects Division from July 1986 to June 1987. He served as Military Secretary to the Commandant of the Marine Corps from July 1987 to March 1989, followed by service as Special Assistant to the Commandant from April 1989 until his retirement from the Marine Corps on August 1, 1989