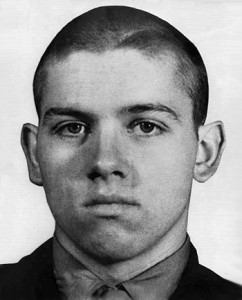 [/custom_frame_left] William Baugh was born on July 7, 1930, in McKinney, Kentucky. He enlisted in the U.S. Marine Corps on January 23, 1948, and after completing basic training at Parris Island, South Carolina, he served with 1st Battalion, 6th Marine Regiment at Camp Lejeune, North Carolina, until September 1950. PFC Baugh then deployed with 3rd Battalion, 1st Marine Regiment to Korea in September 1950, where he participated in the campaigns at Inchon, Seoul, Wonsan, Hungnam, Northern Korea, and Chosin Reservoir, before being killed in action on November 29, 1950. He was originally buried at the United Nations Cemetery in Hungnam, North Korea, but his remains were later moved and reburied at the Glen Haven Cemetery in Harrison, Ohio.[custom_frame_right]

For conspicuous gallantry and intrepidity at the risk of his life above and beyond the call of duty while serving as a member of an antitank assault squad attached to Company G, during a nighttime enemy attack against a motorized column. Acting instantly when a hostile hand grenade landed in his truck as he and his squad prepared to alight and assist in the repulse of an enemy force delivering intense automatic-weapons and grenade fire from deeply entrenched and well-concealed roadside positions, Pfc. Baugh quickly shouted a warning to the other men in the vehicle and, unmindful of his personal safety, hurled himself upon the deadly missile, thereby saving his comrades from serious injury or possible death. Sustaining severe wounds from which he died a short time afterward, Pfc. Baugh, by his superb courage and valiant spirit of self-sacrifice, upheld the highest traditions of the U.S. Naval Service. He gallantly gave his life for his country.