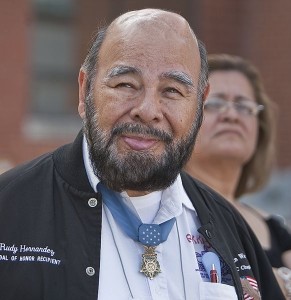 Rodolfo P. “Rudy” Hernandez, a Medal Of Honor recipient from the Korean war passed away on 21 December 2013 at the age of 82 at Womack Army Medical Center after battling cancer. Mr. Hernandez was awarded the Medal Of Honor for his actions near Wontong-ni, Korea, 31 May 1951.

Hernandez was assigned to Company G of the 2nd Battalion, 187th Airborne Regimental Combat Team. His platoon was ordered to defend Hill 420, located near Wonton-ni. On May 31, 1951, his platoon was the object of a numerically superior enemy counterattack. A close-quarters firefight broke out when enemy troops surged up the hill and inflicted numerous casualties on the platoon. Hernandez was wounded during the attack, but was able to fire upon the rushing enemy troops. After his rifle ruptured, he continued attacking the enemy with his bayonet. His attack enabled his comrades to regroup and take back the hill.

A grenade explosion that blew away part of his brain knocked him unconscious. Hernandez, who had received grenade, bayonet, and bullet wounds, appeared dead to the first medic who reached him, Keith Oates. Oates realized, however, that Hernandez was still alive when he saw him move his fingers. Hernandez woke up a month later in a military hospital, unable to move his arms or legs or to talk.

On April 12, 1952, President Harry S. Truman bestowed upon Hernandez the Medal of Honor in a ceremony held in the White House Rose Garden. After many surgeries and physical therapy over a five-year period, Hernandez regained limited use of his right arm and learned to write with his left hand. 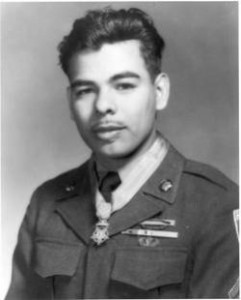 Cpl. Hernandez, a member of Company G, distinguished himself by conspicuous gallantry and intrepidity above and beyond the call of duty in action against the enemy.

His platoon, in defensive positions on Hill 420, came under ruthless attack by a numerically superior and fanatical hostile force, accompanied by heavy artillery, mortar, and machinegun fire which inflicted numerous casualties on the platoon.

His comrades were forced to withdraw due to lack of ammunition but Cpl. Hernandez, although wounded in an exchange of grenades, continued to deliver deadly fire into the ranks of the onrushing assailants until a ruptured cartridge rendered his rifle inoperative.

Immediately leaving his position, Cpl. Hernandez rushed the enemy armed only with rifle and bayonet.

Fearlessly engaging the foe, he killed 6 of the enemy before falling unconscious from grenade, bayonet, and bullet wounds but his heroic action momentarily halted the enemy advance and enabled his unit to counterattack and retake the lost ground.

The indomitable fighting spirit, outstanding courage, and tenacious devotion to duty clearly demonstrated by Cpl. Hernandez reflect the highest credit upon himself, the infantry, and the U.S. Army.