Rocco Antonelli was born on April 14, 1923, in Revere, Massachusetts. He graduated from Revere High School in 1941, worked for General Electric between 1941 and 1943, and then enlisted in the U.S. Army on May 25, 1943. After completing basic and infantry training, PFC Antonelli served with the 36th Infantry Division, deploying to Italy in December 1943, where he participated in the Naples-Foggia and Rome-Arno Campaigns and then the invasion of Southern France in August 1944. PFC Antonelli fought in combat through Central Europe into Germany, and remained on Occupation Duty in Germany until returning to the U.S. in October 1945. He received an honorable discharge from the Army on November 8, 1945, and later worked for General Electric from 1946 until his retirement in 1986.

For gallantry in action on 3 February 1944 in the vicinity of Terelle, Italy. After Company F had successfully attained its objective southeast of Hill 875, the enemy laid down a terrific concentration of mortar and machine gun fire and followed with a determined counter attack. The fire-swept position became untenable, but Private Antonelli, automatic rifleman, steadfastly maintained his position in advance of his platoon and rendered effective fire support while his platoon withdrew. He inflicted heavy casualties upon the on-rushing enemy with deadly accurate fire, and rejoined his platoon only when his ammunition was exhausted. His devotion to duty and utter disregard for his personal safety in the face of over whelming odds materially aided in stemming the enemy counter attack, and gave his platoon urgently needed time for organization and evacuation of the wounded. His gallant action reflects great credit upon himself and the Armed Forces of the United States.[custom_frame_left] 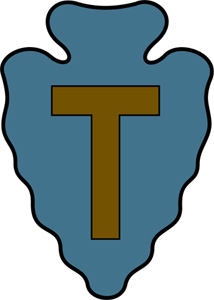 His 1st (of 2) Bronze Star Medal with Valor Citation reads:

For heroic achievement in combat on 17 March 1945 in the vicinity of Mertzwiller, France. When his squad leader was wounded by heavy fire from an enemy machine gun nest, Private First Class Antonelli opened fire with his rifle, killing two Germans and capturing the remaining four. Then, calling on the rest of the squad to follow him, he courageously assaulted another bunker, capturing the ten occupants and a number of automatic weapons and bazookas.