[/custom_frame_left] Ray Archuletta was born on December 24, 1936, in Florence, Colorado. He enlisted in the U.S. Army on April 1, 1954, and was trained as an infantryman. Sgt Archuletta served in several stateside assignments and in Europe before being sent to Southeast Asia in December 1965. During his first tour in South Vietnam, he served with B Company, 2nd Battalion (Airborne), 502nd Infantry Regiment, from December 1965 until he was wounded in April 1966 and sent back to the United States. Sgt Archuletta was assigned to the 325th Infantry Regiment at Fort Bragg, North Carolina, from May 1966 to February 1967, when he returned to Southeast Asia, again serving with B Company, 2nd Battalion. Sgt Archuletta was killed in action on September 7, 1967, and was posthumously promoted to Sergeant First Class and awarded a third Silver Star.[custom_frame_right shadow=”on”] 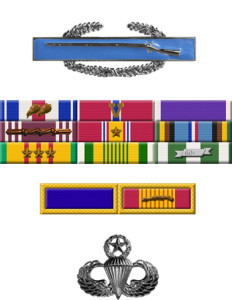 The Synopsis from the General Orders for his 3rd Silver Star reads:

For gallantry in action against a hostile force on 7 September 1967 near Duc Pho, Republic of Vietnam. Staff Sergeant Archuletta distinguished himself as his platoon was moving a wounded man to a landing zone to be extracted when they were suddenly brought under a tremendous volume of enemy automatic weapons fire. Seeing his machinegunner wounded, Sergeant Archuletta ordered his evacuation while he rushed forward with complete disregard for his own safety and in spite of the enemy fire to provide covering fire. As the wounded man was too heavy to be carried by the medic, Sergeant Archuletta again moved through the fire and helped carry him to the safety of a nearby wood line position. Nearing the wood line, Sergeant Archuletta was seriously wounded and in one last valiant effort he ordered the medic to take the wounded man to safety as he stayed behind and expended his ammunition to provide the covering fire. The outstanding gallantry, devotion to his fellow soldier, and his intense dedication to duty displayed by Staff Sergeant Archuletta were in keeping with the finest traditions of the military service and reflect great credit upon himself, the Americal Division, and the United States Army.