John Anderson was born on December 8, 1930, in Torry, New York. He enlisted in the Texas Army National Guard on May 16, 1947, and went on active duty with the U.S. Army on December 31, 1947. Sgt Anderson served as an infantryman at Fort Benning, Georgia, and Fort Carson, Colorado, from January 1948 to October 1956, when he was trained as a personnel specialist. He served at Fort Rucker, Alabama, as a personnel specialist from October 1956 to March 1957, and then served as a broadcast specialist at Fort Rucker until September 1958. His next assignment was as a broadcast specialist at Fort Brooke, Puerto Rico, from September 1958 to April 1961, followed by service at Fort Sam Houston, Texas, from April 1961 to August 1962. Sgt Anderson then served with the Armed Forces Korea Network in South Korea from August 1962 to August 1963, and then at Fort Bliss, Texas, from August 1963 to January 1965, when he returned to Armed Forces Korea Network, serving there as a broadcast supervisor until February 1966. He then served as a broadcast supervisor at Fort Meade, Maryland, from February 1966 to February 1967, followed by service with the U.S. Military Assistance Command in South Vietnam with the Armed Forces Vietnam Network from March 1967 until he was captured and taken as a Prisoner of War during the Tet Offensive on February 3, 1968. After spending 1,858 days in captivity, MSG Anderson was released during Operation Homecoming on March 5, 1973. He was briefly hospitalized to recover from his injuries, and then retired from the Army on August 13, 1973. After retiring from the Army, John worked for the Armed Forces Radio and Television Service until retiring again in 1982. John Anderson died on April 1, 1988, and was buried at Arlington National Cemetery.[custom_frame_right] 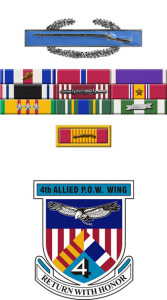 Master Sergeant John T. Anderson distinguished himself by gallantry and intrepidity in connection with military operations against an opposing armed force while serving with Detachment Number 5, American Forces Television Station, Hue, South Vietnam, American Forces Radio-Television Network, South Vietnam, Military Advisory Command, Republic of Vietnam, on 2 February 1968 during the Communist “Tet Offensive.” When the enemy (North Vietnamese Regulars) attempted a sneak armed attack upon the quarters housing Detachment Number 5 personnel at Number 6 Tran Duc Street, Hue, then Sergeant First Class John T. Anderson, Non-Commissioned Officer in Charge of the detachment, without hesitancy courageously took an uncovered position in the quarters living room. Armed with a shotgun he defended this position for more than 16 hours against several enemy attempts to gain entry into the house. During this period he was severely wounded by enemy grenade fire and was under constant exposure to enemy small arms fire. Throughout the ensuing battle, Sergeant First Class Anderson was instrumental in warding off several enemy attempts to overrun the detachment’s position. He personally was responsible for inflicting deadly fire on the attacking enemy force, thereby rendering a demoralizing effect on the attacking enemy force. His position was later overrun and he was held as a Prisoner of War until his release on 5 March 1973. Master Sergeant Anderson’s heroic actions are in keeping with the highest tradition of the services and reflect great credit on himself and the United States Army.