[/custom_frame_left]John Alison was born on November 21, 1912, in Micanopy, Florida. He was commissioned a 2d Lt in the U.S. Army Reserve through the Army ROTC program at the University of Florida on June 10, 1935, and he entered the Aviation Cadet Program of the U.S. Army Air Corps on June 30, 1936. Lt Alison was awarded his pilot wings at Randolph Field, Texas, on June 9, 1937, and then served with the 33rd Pursuit Squadron of the 8th Pursuit Group at Langley Field, Virginia, from July 1937 to May 1941. He next served with the 57th Pursuit Group at various bases in New York, Connecticut, and Massachusetts, from May to October 1941, followed by service as a Military Attache and observer in England and Russia. He served with the 16th Fighter Squadron of the 51st Fighter Group in India, and then with the 75th Fighter Squadron of the 23rd Fighter Group in China, from July 1942 to May 1943. During this time, Col Alison served as the commander of the 75th Fighter Squadron from December 1942 to May 1943, and was credited with the destruction of 6 enemy aircraft in aerial combat plus 1 probable and 1 damaged. He returned to the U.S. and was assigned as commander of the 1st Air Commando Group at Seymour Johnson Field, North Carolina, in October 1943, and then deployed to the China-Burma-India Theater in January 1944. Col Alison commanded the group until the end of the war, and then resigned his commission on August 11, 1946. He joined the Air Force Reserve on June 5, 1947, and retired as a Major General in the reserves on November 20, 1972. After World War II, Alison served as an Assistant Secretary of Commerce, President of the Air Force Association, and as Vice President of the Northrop Corporation, retiring in 1984. He was enshrined in the National Aviation Hall of Fame in 2005. John Alison died on June 6, 2011, and was buried at Arlington National Cemetery. 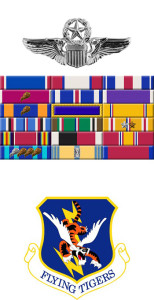 For extraordinary heroism in connection with military operations against an armed enemy while serving as Pilot of a P-40 Fighter Airplane in the 16th Fighter Squadron, 51st Fighter Group, TENTH Air Force, in aerial combat against enemy forces on 30 July 1942, over Hengyang, China. On that date, Major Alison took off in a P-40 fighting plane at 1:00 a.m. to intercept an enemy formation of three heavy bombers flying at 15,000 feet over Hengyang. Without hesitation, he closed for attack upon this superior force, and although receiving fire from the hostile wing ships in engine and cockpit, he delivered fire in succession to each of the three bombers, two of which burst into flames and crashed. The other turned from the attack with smoke pouring from both engines and probably did not reach its home base. With his damaged plane failing and pursuit impossible, Major Alison would have been justified under the circumstances, in leaving his ship by parachute, but he chose to attempt a night crash landing in order to save his vitally needed equipment. Being unable to reach the field, he landed in a nearby river, from which his plane was salvaged. In attacking this superior force at night, destroying two bombers and possibly the entire hostile formation after his ship had been damaged by enemy cross fire, and then attempting to save his stricken plane, Major Alison displayed extraordinary heroism and outstanding skill. His unquestionable valor in aerial combat is in keeping with the highest traditions of the military service and reflects great credit upon himself, the 10th Air Force, and the United States Army Air Forces.