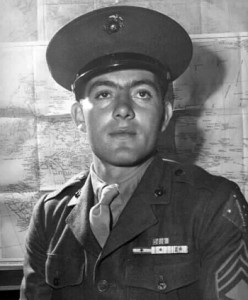 [/custom_frame_right]John Basilone was born on November 4, 1916, in Buffalo, New York, and was raised in Raritan, New Jersey. He enlisted in the U.S. Army in 1934, and served in the Philippines until being released from active duty in 1937. Basilone worked as a truck driver for several years and then enlisted in the U.S. Marine Corps in July 1940. Sgt Basilone served in Guantanamo Bay, Cuba, MCB Quantico, Virginia, on Parris Island, and at New River, North Carolina, before deploying to the Solomon Islands with the 1st Marine Division in August 1942. He participated in the Battle of Guadalcanal from August 1942 to February 1943, and then returned to the U.S. for War Bond Tours in July 1943. Sgt Basilone requested to return to combat and reported to Camp Pendleton, California, in December 1943, deploying to the Pacific in August 1944. He went ashore and was killed in action on the first day of the Battle of Iwo Jima, February 19, 1945. Sgt Basilone was originally interred on Iwo Jima, but was moved to Arlington National Cemetery in 1948.

For extraordinary heroism and conspicuous gallantry in action against enemy Japanese forces, above and beyond the call of duty, while serving with the 1st Battalion, 7th Marines, 1st Marine Division in the Lunga Area, Guadalcanal, Solomon Islands, on 24 and 25 October 1942. While the enemy was hammering at the Marines’ defensive positions, Sgt.  Basilone, in charge of 2 sections of heavy machineguns, fought valiantly to check the savage and determined assault. In a fierce frontal attack with the Japanese blasting his guns with grenades and mortar fire, one of Sgt. Basilone’s sections, with its guncrews, was put out of action, leaving only 2 men able to carry on. Moving an extra gun into position, he placed it in action, then, under continual fire, repaired another and personally manned it, gallantly holding his line until replacements arrived. A little later, with ammunition critically low and the supply lines cut off, Sgt. Basilone, at great risk of his life and in the face of continued enemy attack, battled his way through hostile lines with urgently needed shells for his gunners, thereby contributing in large measure to the virtual annihilation of a Japanese regiment. His great personal valor and courageous initiative were in keeping with the highest traditions of the U.S. Naval Service.