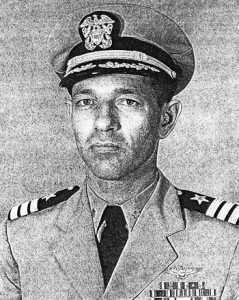 [/custom_frame_left] John Abbott was born on August 20, 1927, in Burlington, Vermont. He enlisted in the U.S. Navy on August 8, 1945, and entered the Navy V-5 flight training program in October 1945. Abbott was released from active duty in September 1946, and then returned to flight training with the Naval Aviation Cadet Program in July 1947, being designated a Naval Aviator in September 1948, and receiving his commission as an Ensign on July 22, 1949. He served with VF-53 from July 1949 to May 1952, and during this time flew combat missions during the Korean War from the aircraft carrier USS Essex (CV-9) from August 1951 to March 1952. His next assignment was with VX-3 from May 1952 to June 1954, and then as an instructor pilot at NAAS Kingsville, Texas, from June 1954 to January 1955. LT Abbott served at NAS Olathe, Kansas, from January to December 1955, and then served with the Navy ROTC detachment at Yale University from December 1955 to September 1956. He served with the Service School Command at NS Great Lakes, Illinois, from September 1956 to June 1957, and then served as air operations officer aboard the aircraft carrier USS Valley Forge (CVS-45) from June 1957 to August 1959. LCDR Abbott then attended the U.S. Naval Postgraduate School at Monterey, California, from September 1959 to June 1960, followed by service with the Commander of Operational Test and Evaluation Force at Norfolk, Virginia, from June 1960 to May 1962. CDR Abbott served with Headquarters U.S. Navy in the Pentagon from May 1962 to June 1963, and then with Air Development Squadron FIVE (VX-5) at NAF China Lake, California, from June 1963 to 1965. He then served as an A-4 Skyhawk pilot with VA-113, flying combat missions from the aircraft carrier USS Kitty Hawk (CVA-63) from November 1965 until he was forced to eject over North Vietnam and was taken as a Prisoner of War on April 20, 1966, having just taken command of VF-113 nine days before. CDR Abbott was reported to have died in captivity 7 days later, on April 27, 1966. He was posthumously promoted to Captain, and his remains were returned to the United States on March 13, 1974. Capt Abbott is buried at Arlington National Cemetery. 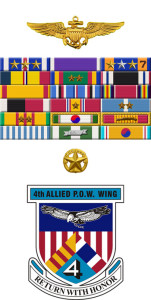 For heroism and extraordinary achievement in aerial flight as strike leader and pilot in Attack Squadron ONE HUNDRED AND THIRTEEN, based aboard USS KITTY HAWK (CVA-63) during operations against enemy aggressor forces in the Republic of Vietnam on 22 December 1965. Participating as strike leader of a flak suppression element on the extremely vital and heavily defended Uong Bi Thermal Power Plant northeast of Haiphong, Captain (then Commander) Abbott preceded the fighter-bombers into the target area and, in the face of intense and accurate heavy antiaircraft fire, led his division in direct and devastating counterfire with the most active antiaircraft emplacements defending the power plant, personally damaging at least one 8-gun emplacement and silencing several others. By his courageous leadership and determination that the fighter-bombers were able to execute a devastating and highly successful attack on the target and retire without sustaining damage from the enemy. His exceptional performance and outstanding devotion to duty were in keeping with the highest traditions of the United States Naval Service.