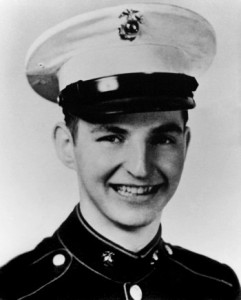 David Champagne was born on November 13, 1932, in Waterville, Maine. He enlisted in the U.S. Marine Corps on March 7, 1951, and after completing basic training at Parris Island, South Carolina, he served at Camp Pendleton, California, from June to August 1951. Cpl Champagne deployed to Korea in October 1951, where he served with A Company, 1st Battalion, 7th Marines, 1st Marine Division until he was killed in action on May 28, 1952. He was buried at the Saint Francis Catholic Cemetery in Waterville, Maine. 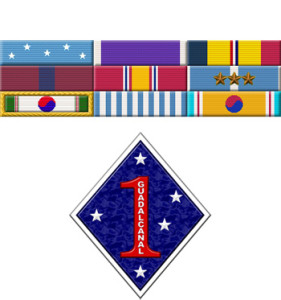 For conspicuous gallantry and intrepidity at the risk of his life above and beyond the call of duty while serving as a fire team leader of Company A, in action against enemy aggressor forces. Advancing with his platoon in the initial assault of the company against a strongly fortified and heavily defended hill position, Cpl. Champagne skillfully led his fire team through a veritable hail of intense enemy machine gun, small-arms, and grenade fire, overrunning trenches and a series of almost impregnable bunker positions before reaching the crest of the hill and placing his men in defensive positions. Suffering a painful leg wound while assisting in repelling the ensuing hostile counterattack, which was launched under cover of a murderous hail of mortar and artillery fire, he steadfastly refused evacuation and fearlessly continued to control his fire team When the enemy counterattack increased in intensity, and a hostile grenade landed in the midst of the fire team, Cpl. Champagne unhesitatingly seized the deadly missile and hurled it in the direction of the approaching enemy. As the grenade left his hand, it exploded blowing off his hand and throwing him out of the trench. Mortally wounded by enemy mortar fire while in this exposed position, Cpl. Champagne, by his valiant leadership, fortitude, and gallant spirit of self-sacrifice in the face of almost certain death, undoubtedly saved the lives of several of his fellow marines. His heroic actions served to inspire all who observed him and reflect the highest credit upon himself and the U.S. Naval Service. He gallantly gave his life for his country.