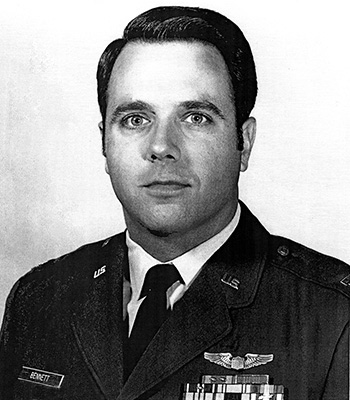 Waring Bennett was born on December 22, 1942, in Macon, Georgia, and grew up in Natchez, Mississippi. He enlisted in the U.S. Marine Corps Reserve on February 1, 1962, and served with the 2nd 105mm Howitzer Battery in Jackson, Mississippi, until his honorable discharge from the Marine Corps on January 31, 1968. He then enlisted in the U.S. Air Force Reserve on July 30, 1968, and entered Officer Training School on November 8, 1968, earning his commission as a 2d Lt in the U.S. Air Force on February 7, 1969. Lt Bennett next completed Undergraduate Pilot Training and was awarded his pilot wings at Williams AFB, Arizona, in March 1970, followed by B-52 Stratofortress Combat Crew Training from March to September 1970. He served as a B-52 pilot with the 2nd Bomb Squadron of the 22nd Bomb Group at March AFB, California, from September to December 1970, and then with the 486th Bomb Squadron of the 22nd Bomb Wing from December 1970 to June 1971. During this time, Lt Bennett deployed to Southeast Asia for Arc Light bombing missions from February to June 1971. His final assignment was as a B-52 pilot back with the 2nd Bomb Squadron at March AFB from June 1971 until he was killed in action while on temporary duty to Southeast Asia on December 22, 1972. Capt Bennett was officially listed as Missing in Action and he was promoted to Major before being declared dead on October 9, 1980. His remains have never been returned to the United States.
His 2nd Distinguished Flying Cross w/Valor Citation reads:Captain Thomas W. Bennett, Jr., distinguished himself by heroism while participating in aerial flight as a B-52 Copilot in Southeast Asia on 22 December 1972. On that date, Captain Bennett participated in high priority bombing missions against vital military targets in heavily defended areas of North Vietnam. Despite the intensity of the defensive reaction and the extreme hazard posed by numerous surface-to-air missiles and hostile interceptors, Captain Bennett displayed extraordinary courage and a remarkable ability to place mission requirements above his personal safety as he flew his aircraft to a successful release of his ordnance on the designated targets. The outstanding heroism and selfless devotion to duty displayed by Captain Bennett reflect great credit upon himself and the United States Air Force.