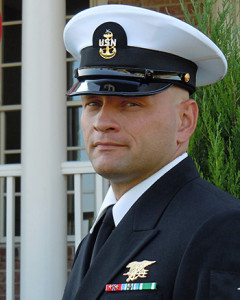 Thomas Ratzlaff was born on November 3, 1976, in Harrison, Arkansas. He enlisted in the U.S. Navy on May 25, 1995, and completed basic training at NTC Great Lakes, Illinois, in July 1995. Ratzlaff next completed gunner’s mate training at NTC Great Lakes from August 1995 to March 1996, and then served aboard the guided-missile destroyer USS Kidd (DDG-993) from April 1996 to March 1998. Petty Officer Ratzlaff attended Basic Underwater Demolition/SEAL training at NAB Coronado, California, from June to December 1998 and then Jump School at Fort Benning, Georgia, in January 1999. He served with SEAL Team TWO at NAB Little Creek, Virginia, from February 1999 to April 2003, followed by service with Naval Special Warfare Development Group (DEVGRU) at Dam Neck, Virginia, from April 2003 until he was killed in action when the CH-47 Chinook helicopter he was aboard was shot down in Afghanistan on August 6, 2011. SCPO Ratzlaff was buried at Arlington National Cemetery. While serving with SEAL Team TWO he deployed to Kosovo in 1999, and while serving with DEVGRU he deployed to Afghanistan in support of Operation Enduring Freedom multiple times. During this time he also deployed to Iraq in 2007.

For heroic achievement in connection with combat operations against the enemy as a Reconnaissance Team Leader for a Joint Task Force in support of Operation ENDURING FREEDOM from 1 March 2010 to 1 July 2010. During this period, Senior Chief Petty Officer Ratzlaff displayed superior battlefield courage on several direct action missions that resulted in numerous enemy combatants eliminated. On 4 April 2010, he was in charge of a sniper team during a nighttime raid on a heavily armed foreign fighter commander. As the assault force set containment, they were engaged by an armed sentry patrolling in front of the target building. From his position on an adjacent building, Senior Chief Petty Officer Ratzlaff quickly eliminated the enemy sentry while the tactical call-out commended. During this call-out, several heavily armed foreign fighters unleashed a massive volley of fire from inside the targeted building. While under heavy enemy small arms fire, Senior Chief Petty Officer Ratzlaff calmly maintained his position as he returned direct fire at the barricaded enemy until the enemy fire subsided. His decisive actions, under fire, resulted in the elimination of the targeted individual and many heavily armed foreign fighters. By his extraordinary guidance, zealous initiative, and total dedication to duty, Senior Chief Petty Officer Ratzlaff reflected great credit upon himself and upheld the highest traditions of the United States Naval Service.