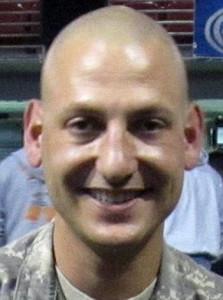 Pat Hamburger was born on Memorial Day, May 25, 1981, in Sioux City, Iowa, and grew up in Lincoln, Nebraska. He enlisted in the Nebraska Army National Guard on July 28, 1998, and went on active duty to begin basic training on June 8, 1999. Pvt Hamburger attended basic training at Fort Jackson, South Carolina, from June to August 1999, and Advanced Individual Training as a Petroleum Supply Specialist at Fort Lee, Virginia, from August to October 1999. He again went on active duty on January 31, 2000, and attended Advanced Individual Training as an AH-1 Cobra helicopter repairer at Fort Eustis, Virginia, from February to July 2000. Sgt Hamburger served as an AH-1, AH-64 Apache, and OH-58 Kiowa helicopter repairer with Troop F, 1-167th Air Cavalry Squadron (later redesignated 1-124th Air Cavalry Squadron) at Lincoln, Nebraska, with the Nebraska Army National Guard from July 2000 to March 2004, followed by service as an OH-58 and CH-47 Chinook helicopter repairer and flight engineer with Troop D, 1-124th Air Cavalry Squadron at Lincoln, Nebraska, from March 2004 to April 2006. His next assignment was as a CH-47 Chinook repairer and flight engineer with Company B, 2-135th General Support Aviation Battalion (GSAB) at Grand Island, Nebraska, with the Nebraska Army National Guard from April 2006 to November 2007, then with Company D, 2-135th GSAB at Grand Island from November 2007 to January 2008, and back to Company B (later redesignated Company B, 2d Battalion, 135th Aviation Regiment) from January 2008 until he was killed in action aboard his CH-47 call sign Extortion 17 in Afghanistan on August 6, 2011. SSgt Hamburger went on active duty in May 2011, and deployed to Afghanistan in support of Operation Enduring Freedom in July 2011. Pat Hamburger was buried at the Wyuka Cemetery in Lincoln, Nebraska.

For meritorious service from 21 July 2011 to 6 August 2011, while assigned to Company B, 2d Battalion, 135th Aviation Regiment, during Operation Enduring Freedom. Staff Sergeant Hamburger’s commitment contributed to our Nation’s continual war on terrorism and his actions represented his dedication to the security of the United States of America. His sincere desire to bring peace and stability to a foreign nation is an example of what all American Soldiers strive to achieve. No greater honor can be demonstrated by his ultimate sacrifice, and he will be forever remembered for his actions. Staff Sergeant Hamburger’s duty performance and selfless service are in keeping with the highest traditions of military service and reflect great credit upon himself, the United States Forces – Afghanistan, and the United States Army.