Neil Roberts was born on August 16, 1969, in Woodland, California. He enlisted in the U.S. Navy on September 14, 1987, and completed basic training at NTC Orlando, Florida, in November 1987. Roberts next attended Aviation Electrician’s Mate training at NATTC Millington, Tennessee, from November 1987 to May 1988, followed by service as an EP-3 Aries I aircrew member with Fleet Air Reconnaissance Squadron ONE (VQ-1) at NAS Agana, Guam, from June 1988 to January 1992. During this time he deployed with his Squadron in support of Operation Desert Shield from August 1990 to January 1991, and Desert Storm from January to March 1991. Petty Officer Roberts attended Basic Underwater Demolition/SEAL training with Class 184 at NAB Coronado, California, from January to October 1992, and then attended Jump School at Fort Benning, Georgia, in October and November 1992. His next assignment was with SEAL Team TWO at NAB Little Creek, Virginia, from November 1992 to June 1999, and during this time he deployed to San Vito, Italy, to support Allied Forces during the Bosnian War from November 1993 to May 1994, and to Sarajevo, Bosnia/Herzegovina, with the Combined Joint Special Operations Task Force – Stabilization Force from September 1997 to October 1998. Petty Officer Roberts’ final assignment was with Naval Special Warfare Development Group (DEVGRU) at Dam Neck Annex, Virginia, from June 1999 until he became the first Navy SEAL killed in action during Operation Enduring Freedom, Afghanistan, on March 4, 2002. He was buried at Prospect Hill Cemetery in York, Pennsylvania. 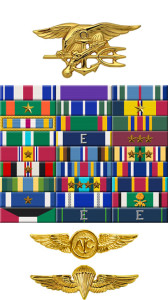 For conspicuous gallantry and intrepidity in action against the enemy while serving as a member of a special operations unit that conducted multiple insertions and combat operations deep behind enemy lines from 9 January to 5 March 2002. During this period, Petty Officer Roberts was assigned to a combined joint task force in support of Operation ENDURING FREEDOM. Petty Officer Roberts performed superbly during several, in-extremis, combat operations and rescue of personnel, deep in enemy-controlled territory while under fire from enemy forces. On 3 March 2002, his unit planned an operation in the Paktia Province in support of Operation ANACONDA, the largest combat operation against enemy forces to date. On that evening, his unit was to conduct a clandestine insertion onto a 10,000 foot mountain peak to establish an over watch position. As the helicopter moved into position for the insertion, Petty Officer Roberts positioned himself on the helicopter ramp in order to expeditiously exit the helicopter, minimizing the threat to the aircraft and crew. Without notice, his CH-47 helicopter received a rocket-propelled grenade exploding through the body of the aircraft. Hydraulic lines showered the metal ramp with slippery fluid as the aircraft lurched violently from the unexpected assault. Petty Officer Roberts was thrown from the ramp of the helicopter falling onto the enemy infested mountain top just feet below. He immediately maneuvered to establish a defensive position and make contact with rescue forces. He defiantly fought the overwhelming enemy forces undoubtedly causing significant tolls to their numbers. Surrounded by superior fire power, he died on the battlefield from fatal combat wounds. Petty Officer Roberts’ bold leadership, wise judgment, and complete dedication to duty reflected great credit upon him and were in keeping with the highest traditions of the United States Naval Service.