Matt Axelson was born on June 25, 1976, in Cupertino, California. He enlisted in the U.S. Navy on December 28, 2000, and completed basic training at Recruit Training Command Great Lakes, Illinois, in March 2001. After completing Fleet Antisubmarine Warfare Training in April 2001, Axelson went through SEAL training, Airborne training, and SEAL Vehicle Delivery Team training before being assigned to SEAL Vehicle Delivery Team ONE at Pearl Harbor, Hawaii, in May 2002. PO2 Axelson deployed to Afghanistan in support of Operation Enduring Freedom in April 2005, and he was killed in action during Operation Red Wings on June 28, 2005. Matt Axelson was buried at the Glen Oaks Memorial Park in Chico, California.

For extraordinary heroism in actions against the enemy while serving in a four-man Special Reconnaissance element with SEAL Delivery Vehicle Team ONE, Naval Special Warfare Task Unit, Afghanistan from 27 to 28 June 2005. Petty Officer Axelson demonstrated extraordinary heroism in the face of grave danger in the vicinity of Asadabad, Konar Province, Afghanistan. Operating in the middle of an enemy-controlled area, in extremely rugged terrain, his Special Reconnaissance element was tasked with locating a high-level Anti-Coalition Militia leader, in support of a follow-on direct action mission to disrupt enemy activity. On 28 June 2005, the element was spotted by Anti-Coalition Militia sympathizers, who immediately revealed their position to the militia fighters. As a result, the element directly encountered the enemy. Demonstrating exceptional resolve and fully understanding the gravity of the situation, Petty Officer Axelson’s element bravely engaged the militia, who held both a numerical and positional advantage. The ensuing firefight resulted in numerous enemy personnel killed, with several of the Navy members suffering casualties. Ignoring his injuries and demonstrating exceptional composure, Petty Officer Axelson advised the teammate closest to him to escape while he provided cover fire. With total disregard for his own life and thinking only of his teammate’s survival, he continued to attack the enemy, eliminating additional militia fighters, until he was mortally wounded by enemy fire. A champion of freedom, Petty Officer Axelson will be remembered for his self-sacrificing actions in the continuing Global War on Terrorism. By his undaunted courage, fortitude under fire, and unwavering dedication to duty, Petty Officer Axelson reflected great credit upon himself and upheld the highest traditions of the United States Naval Service. He gallantly gave his life for the cause of freedom. 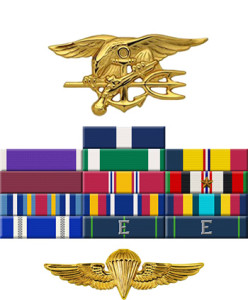