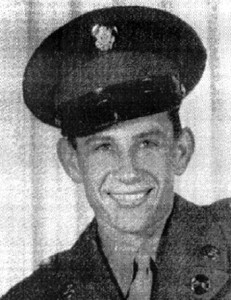 Luther Story was born on July 20, 1931, in Buena Vista, Georgia. He enlisted in the U.S. Army on October 21, 1948, and after completing Basic Training and Advanced Training as an Infantryman, PFC Story served with Company A, 9th Infantry Regiment of the 2nd Infantry Division at Fort Lewis, Washington, until July 1950, when he deployed with his unit to Pusan, South Korea, at the beginning of the Korean War. CPL Story was killed in action near Agok, South Korea, on September 1, 1950, but he was officially listed as Missing in Action until he was declared dead on September 1, 1953. His remains have never been returned, but he does have a cenotaph marker at Andersonville National Cemetery near Andersonville, Georgia. 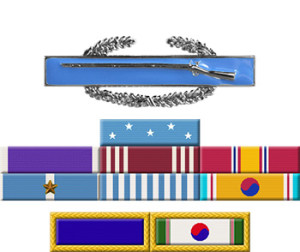 Pfc. Story, distinguished himself by conspicuous gallantry and intrepidity above and beyond the call of duty in action. A savage daylight attack by elements of 3 enemy divisions penetrated the thinly held lines of the 9th Infantry. Company A beat off several banzai attacks but was bypassed and in danger of being cut off and surrounded. Pfc. Story, a weapons squad leader, was heavily engaged in stopping the early attacks and had just moved his squad to a position overlooking the Naktong River when he observed a large group of the enemy crossing the river to attack Company A. Seizing a machine gun from his wounded gunner he placed deadly fire on the hostile column killing or wounding an estimated 100 enemy soldiers. Facing certain encirclement the company commander ordered a withdrawal. During the move Pfc. Story noticed the approach of an enemy truck loaded with troops and towing an ammunition trailer. Alerting his comrades to take cover he fearlessly stood in the middle of the road, throwing grenades into the truck. Out of grenades he crawled to his squad, gathered up additional grenades and again attacked the vehicle. During the withdrawal the company was attacked by such superior numbers that it was forced to deploy in a rice field. Pfc. Story was wounded in this action, but, disregarding his wounds, rallied the men about him and repelled the attack. Realizing that his wounds would hamper his comrades he refused to retire to the next position but remained to cover the company’s withdrawal. When last seen he was firing every weapon available and fighting off another hostile assault. Private Story’s extraordinary heroism, aggressive leadership, and supreme devotion to duty reflect the highest credit upon himself and were in keeping with the esteemed traditions of the military service.