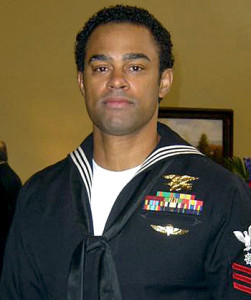 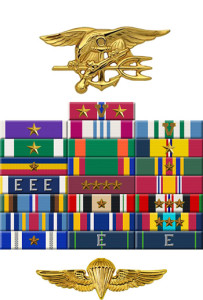 Kevin Houston was born on September 20, 1975, in West Hyannisport, Massachusetts. He enlisted in the U.S. Navy on January 18, 1995, and went on active duty to begin basic training on January 26, 1995. After completing basic training at NTC Great Lakes, Illinois, in April 1995, he attended Aviation Electrician’s Mate training at NAS Lemoore, California, from May to June 1995. His first assignment was with VFA-195 aboard the aircraft carrier USS Independence (CV-62) home-ported at Yokosuka, Japan, from June 1995 to January 1996, followed by temporary duty at Personnel Support Detachment Treasure Island, California, from January to June 1996. Petty Officer Houston served with Helicopter Anti-Submarine Squadron TWO (HS-2) at San Diego, California, from July 1996 to July 1998, and then attended Basic Underwater Demolition/SEAL training at NAB Coronado, California, from July 1998 to February 1999. His next assignment was with SEAL Team FOUR at NAB Little Creek, Virginia, from May 1999 to December 2005, followed by service as Tactical Ground Mobility Weapons Lead Instructor with Naval Special Warfare Group TWO Training Detachment at NAB Little Creek from December 2005 to January 2008. Petty Officer Houston’s final assignment was with Naval Special Warfare Development Group (DEVGRU) at Dam Neck, Virginia, from January 2008 until he was killed in action when the CH-47 Chinook helicopter he was aboard was shot down in Afghanistan on August 6, 2011. While serving with SEAL Team FOUR he deployed in support of Operation Iraqi Freedom in 2005, and he later deployed with DEVGRU to Afghanistan in support of Operation Enduring Freedom multiple times. Kevin Houston was buried at Arlington National Cemetery.