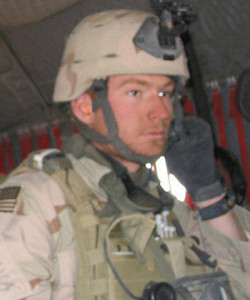 John Faas was born on October 31, 1979, in Minneapolis, Minnesota. He enlisted in the U.S. Navy on September 21, 1998, and went on active duty to begin basic training on September 14, 1999. After completing basic training at NTC Great Lakes, Illinois, in November 1999, he attended Information Systems Technician School at NTC Great Lakes from November 1999 to March 2000, followed by Basic Underwater Demolition/SEAL training at NAB Coronado from April 2000 to January 2001. Petty Officer Faas attended Jump School at Fort Benning, Georgia, in February and March 2001, and then completed SEAL Qualification Training at NAB Coronado in June 2001. His first assignment was with SEAL Team EIGHT at NAB Little Creek, Virginia, from July 2001 to April 2005, followed by service with Naval Special Warfare Development Group (DEVGRU) at Dam Neck, Virginia, from April 2005 until he was killed in action when the CH-47 Chinook helicopter he was aboard was shot down in Afghanistan on August 6, 2011. While serving with SEAL Team EIGHT, Petty Officer Faas deployed to Stuttgart, Germany, with Naval Special Warfare Unit TWO from October 2002 to January 2003, to the Horn of Africa with Naval Special Warfare Unit THREE from April to July 2003, and to Afghanistan in support of Operation Enduring Freedom during 2004 and 2005. He also later deployed with DEVGRU to Afghanistan and to Iraq in support of Operation Iraqi Freedom multiple times.

For heroic achievement in connection with combat operations against the enemy as an Assault Team Member for a Joint Task Force in support of Operation ENDURING FREEDOM on 17 March 2010. On this date, Chief Petty Officer Faas was part of a ground force element that executed a daring nighttime raid against a heavily armed enemy commander. While attempting to engage a barricaded fighter hidden inside the target building, one of Chief Petty Officer Faas’ teammates was struck and mortally wounded by enemy fire, causing him to fall directly in front of the barricaded insurgent’s position. With complete disregard for his safety, Chief Petty Officer Faas fought his way into the courtyard to a position within feet of the barricaded shooter where he engaged the enemy with grenades and life saving cover fire, enabling his teammates to move the wounded assaulter to safety. Resolved to ensure the enemy fighter was eliminated, Chief Petty Officer Faas remained in the compound as the barricaded enemy continued unleashing volleys of sporadic fire. He bravely held his ground and continued engaging the enemy at point blank range until the decision was made to extract the assault force. His heroic bravery during intense combat operations is an inspiration to all shoe serve with him. By his extraordinary guidance, zealous initiative, and total dedication to duty, Chief Petty Officer Faas reflected great credit upon himself and upheld the highest traditions of the United States Naval Service.