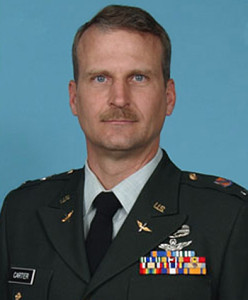 David Carter was born on July 12, 1964, at RAF Mildenhall, England. He enlisted in the U.S. Army Reserve on December 23, 1983, and went on active duty to begin basic training in May 1984. SP4 Carter completed Military Police One Station Unit Training (OSUT) at Fort McClellan, Alabama, in September 1984, and he then served with the 346th Military Police Company of the U.S. Army Reserve at Hutchinson, Kansas, until he joined the Kansas Army National Guard on October 15, 1985. His next assignment was as a petroleum handling specialist with the 435th General Support Aviation Company at Salina, Kansas, from October 1985 until he was selected for Warrant Officer Training in July 1987. Carter was appointed a Warrant Officer in the Kansas Army National Guard and was designated a Rotary Wing Aviator on May 26, 1988, and then served as an OH-58 Kiowa scout pilot with the Kansas Army National Guard until he transferred to the Colorado Army National Guard on September 1, 1988. Chief Warrant Officer Carter served as an AH-1 Cobra pilot with Company C and then Company A, 2d Battalion of the 135th Aviation Regiment of the Colorado Army National Guard at Aurora, Colorado, from September 1988 to November 1996, followed by service as a UH-1 Iroquois and then CH-47 Chinook pilot and instructor pilot with Company B, 2d Battalion of the 147th Aviation Regiment at Eagle, Colorado, from November 1996 to December 2002. His next assignment was as a CH-47 instructor pilot with Detachment 1, Company E of the 168th Aviation Regiment at Aurora, Colorado, from December 2002 to November 2005, and then as a CH-47 instructor pilot with Detachment 1, Company B, 2d Battalion of the 135th Aviation Regiment at Aurora and then at Buckley AFB, Colorado, from November 2005 to until he was killed in action when his CH-47 call sign Extortion 17 was shot down by an enemy rocket-propelled grenade on August 6, 2011. During this time, Chief Warrant Officer Carter had served on active duty in AGR status with the Colorado Army National Guard from April 2005 to March 2006, and from August 2007 to May 2011. He had been activated for service in Iraq during Operation Iraqi Freedom from August 2006 to August 2007, and for service in Afghanistan during Operation Enduring Freedom from July 2011 until his death a month later. Chief Warrant Officer Carter was posthumously promoted to CW5. David Carter was buried at the Grandview Cemetery at Fort Collins, Colorado.

For meritorious service from 21 July 2011 to 6 August 2011, while assigned to Detachment 1, Company B, 2d Battalion, 135th Aviation Regiment, during Operation Enduring Freedom. Chief Warrant Officer Four Carter’s commitment contributed to our Nation’s continual war on terrorism and his actions represented his dedication to the security of the United States of America. His sincere desire to bring peace and stability to a foreign nation is an example of what all American Soldiers strive to achieve. No greater honor can be demonstrated by his ultimate sacrifice, and he will be forever remembered for his actions. Chief Warrant Officer Four Carter’s duty performance and selfless service are in keeping with the highest traditions of military service and reflect great credit upon himself, the United States Forces – Afghanistan, and the United States Army.