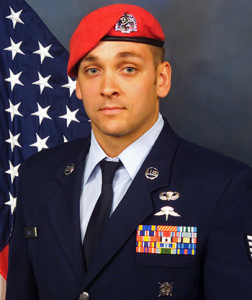 Staff Sergeant Andrew W. Harvell distinguished himself by meritorious achievement as Special Tactics Combat Controller, 21st Expeditionary Special Tactical Squadron, Combined Joint Special Operations Air Component while engaged in combat against an enemy of the United States in Iraq from 26 January 2008 to 14 May 2008. During this period, in support of Operation IRAQI FREEDOM, Sergeant Harvell executed over 50 combat patrols and raids while operating in Suwayrah, Iraq. On 29 March 2008, Sergeant Harvell’s expertise helped save friendly forces when they were engaged at close range by accurate enemy fire, when Sergeant Harvell’s three-vehicle convoy was engaged by a truck containing 15 heavily armed Jaish al Mahdi fighters. Sergeant Harvell exposed himself to obtain a better vantage point to return fire and to establish communications with friendly aircraft. His actions culminated with a show of force from two F-16s, scattering their forces, which effectively ended the engagement. The battle resulted in no friendly casualties and 13 enemy killed. Sergeant Harvell was credited with killing four of the insurgents. Later, he participated in Operation MERCURY, where he directed multiple strikes on numerous dispersed enemy positions. His actions resulted in the elimination of seven anti-Coalition fighters, including one high-value target, thereby denying an insurgent stronghold. The exemplary leadership, personal endeavor, and devotion to duty displayed by Sergeant Harvell in this responsible position reflect great credit upon himself and the United States Air Force.

For exceptionally meritorious achievement as a Combat Controller for a Joint Task Force in support of Operation Enduring Freedom. During this period, Sergeant Harvell conducted several objectives resulting in multiple enemies eliminated and detained. He led the full spectrum Joint Terminal Attack Controller planning, ensuring the successful execution of the task force’s highest priority missions. On 5 August 2011, Sergeant Harvell and his team responded on a mission to eliminate or capture a high value Taliban commander in Afghanistan. His helicopter was attacked in the target area by enemy fighters and was shot down be a rocket propelled grenade. Through his distinctive accomplishments, Staff Sergeant Harvell reflected great credit upon himself, this command, the United States Air Force, and the United States Army.