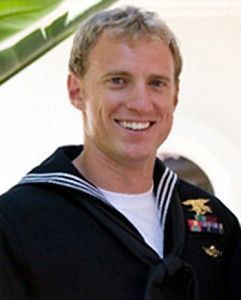 Aaron Vaughn was born on June 24, 1981, in Obion County, Tennessee. He enlisted in the U.S. Navy on June 24, 2002, and went on active duty to begin basic training on November 25, 2002. Vaughn completed basic training at NTC Great Lakes, Illinois, in February 2003, and then trained at the Fleet Combat Training Center Atlantic at Dam Neck Annex, Virginia, from February to May 2003. He next attended Basic Underwater Demolition/SEAL training at NAB Coronado, California, from May 2003 to April 2004, followed by Jump School at Fort Benning, Georgia, in May 2004. Petty Officer Vaughn attended Naval Special Warfare Advanced Training at NAB Coronado and in Kodiak, Alaska, from June to November 2004, and then served with SEAL Team ONE at NAB Coronado from November 2004 to June 2008. His next assignment was as an Assaults Instructor with Naval Special Warfare Group ONE Training Detachment at NAB Coronado from June 2008 to October 2010, followed by service with Naval Special Warfare Development Group (DEVGRU) at Dam Neck Annex from October 2010 until he was killed in action when the CH-47 Chinook helicopter he was aboard was shot down in Afghanistan on August 6, 2011. He was buried at Arlington National Cemetery, and was posthumously promoted to Chief Petty Officer. Aaron and his wife Kimberly were married on May 3, 2008, and they had two children together; Reagan Carson Vaughn and Catherine Chamberlyn Vaughn. He was also survived by his parents Billy and Karen Vaughn, and his two sisters; Tara Baldwin and Ana Rivera.

For heroic achievement in connection with combat operations against the enemy as an Assault Team Member for a Joint Task Force in support of Operation ENDURING FREEDOM from 28 June 2011 to 6 August 2011. During this period, Chief Petty Officer Vaughn executed multiple operations and was part of a Task Force credited with the elimination and detention of numerous enemy combatants inkling several high value targets. On 6 August 2011, he served as an Assault Team Member for a Special Operations element responding to enemy forces escaping from a nearby raid in an enemy contested valley in Afghanistan. Chief Petty Officer Vaughn, knowing the valley served as an enemy safe haven with no sustained coalition force presence and knowing that his mission was to interdict and ambush an armed enemy force, volunteered to pursue an enemy known to have attacked coalition forces with plans for future attacks. He selflessly chose to interdict the fleeing enemy when he boarded the helicopter with his teammates. The aggressive mission to prevent future attacks on coalition forces ended in tragedy when the helicopter on which he was riding was struck by a rocket-propelled grenade, causing the helicopter to crash. By his extraordinary guidance, zealous initiative, and total dedication to duty, Chief Petty Officer Vaughn reflected great credit upon himself and upheld the highest traditions of the United States Naval Service.