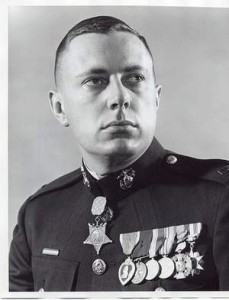 Medal of Honor recipient and retired Marine Capt. John James McGinty III has died in Beaufort, S.C. He was 73.

McGinty received the nation’s highest valor award for his actions during the Vietnam War in a July 18, 1966, battle that resulted in nearly 500 enemy dead.

While pulling rear security for 3rd Battalion, 4th Marines, which was withdrawing after being besieged for three days, his platoon came “under heavy small-arms, automatic weapons and mortar fire from an estimated enemy regiment,” according to his citation.

Then-Sgt. McGinty responded by rallying his platoon’s men to fend off wave after wave of enemy attacks over a four-hour period.

During a particularly vicious assault, two of his unit’s squads were separated from the rest of the platoon. McGinty responded by charging across fire-swept terrain, braving both machine guns and mortars, to reach the cut off squads.

“Finding 20 men wounded and the medical corpsman killed, he quickly reloaded ammunition magazines and weapons for the wounded men and directed their fire upon the enemy,” his citation reads.

Despite sustaining his own painful wounds, he continued shouting encouragement to fellow Marines and directing their fire “so effectively that the attacking horde were beaten off.”

When a determined enemy attempted to outflanked his position, he personally killed five with his .45-caliber 1911 pistol. On the verge of being overrun, he redirected artillery fire to within 50 yards of his position.

“The destructive firepower routed the enemy, who left an estimated 500 bodies on the battlefield,” his citation reads.

McGinty who first enlisted in the Marine Corps Reserve in 1957, before entering active duty the following year, went on to serve through retirement in 1976.

He will be buried at the Beaufort National Cemeteryat 1 p.m. Thursday, reports the Island Packet.