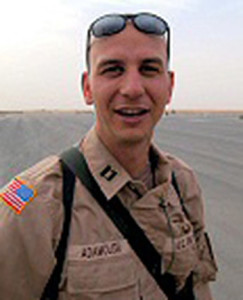 [/custom_frame_left]James Adamouski was born on June 22, 1973, in Tampa, Florida. He entered the U.S. Military Academy at West Point on July 1, 1991, and was commissioned a 2d Lt in the Aviation Branch on June 3, 1995. After completing Rotary Wing Aviator Training and UH-60 Blackhawk training, Lt Adamouski served in the U.S., Germany, Hungary, Bosnia, and Albania, spending most of the time between December 1996 and December 1999 with the 158th Aviation Regiment in support of operations in Kosovo and the former Republic of Yugoslavia. Capt Adamouski served at Fort Rucker, Alabama, from December 1999 to November 2000, and then with the 3rd Aviation Regiment at Hunter Army Airfield, Georgia, from November 2000 to March 2003. He then deployed with the 3rd Aviation Regiment to Kuwait for Operation Iraqi Freedom, and was killed in action on April 2, 2003. His body was flown back to the U.S. and he was buried at Arlington National Cemetery on April 24, 2003.

For meritorious service during the period of 19 March 2003 to 2 April 2003, while assigned to Company B, 2d Battalion, 3d Aviation, 3d Infantry Division in Kuwait, Captain Adamouski gave the ultimate sacrifice. His duty, performance and commitment while participating in combat operations to liberate Iraq are in keeping with the highest traditions of selfless service and reflect great credit upon himself, the 3d Infantry Division, Victory Corps, and the United States Army.