We have come out with our first hooded fleece to keep you warm and looking sharp. The fleece features our logo surrounded by the silhouette of bullets and the words Si vis pacem, para bellum. The fleece is in “Pre-Order” status allowing you to order one now for the pre-order price of $35.00. Once these hoodies are in stock, the price will likely be around $50.00 each. So, what’s your enemy? 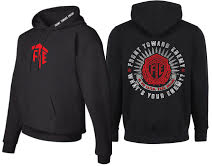 Si vis pacem, para bellum is a Latin adage translated as, “If you wish for peace, prepare for war” (usually interpreted as meaning peace through strength – a strong society being arguably less likely to be attacked by enemies).

The source of this adage remains unknown; however, it is universally believed, rightly or wrongly, to be based on a quotation from Roman military writer Publius Flavius Vegetius Renatus: Igitur qui desiderat pacem, praeparet bellum. The saying is one of many from or based on his work, Epitoma rei militaris, possibly written around the year 390 AD. It is embedded in a passage that stresses the importance of skillful preparation of military actions (an ‘Art of War’, so to say) as opposed to mere reliance on coincidence or superiority of numbers:

“Therefore, he who wishes peace, should prepare war; he who desires victory, should carefully train his soldiers; he who wants favorable results, should fight relying on skill, not on chance.”

Whatever the source, the adage has become a living vocabulary item itself, used in the production of different ideas in a number of languages. The actual words of Vegetius are not even recognized by a large number of writers, who attribute the saying directly to him.