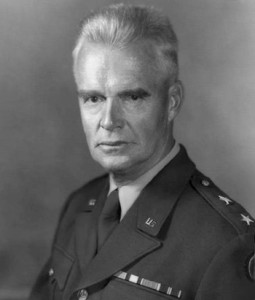 William Dean was born on August 1, 1899, in Carlyle, Illinois. He enlisted in the Field Artillery of the U.S. Army on October 8, 1918, but was too late to be deployed to France for action in World War I, and was discharged on December 16, 1918. Dean was commissioned a 2nd Lt in the California National Guard while he was attending Army ROTC at the University of California at Berkeley on March 24, 1921, and received a commission as a 2nd Lt of Infantry in the U.S. Army and went on active duty on October 18, 1923. He served in various Infantry assignments before World War II, and attended Command and General Staff School from 1935 to 1936, and later Army War College from September 1939 to June 1940. Col Dean served on the War Department General Staff in Washington, D.C., from June 1940 to March 1944, and then served as Assistant Division Commander of the 44th Infantry Division, deploying with the unit to England and then landing in France in September 1944. Gen Dean took command of the 44th Infantry Division in December 1944, and commanded the unit until September 1945, when he was assigned to the staff at the Command and General Staff School at Fort Leavenworth, Kansas. He served as a Director and later as Assistant Commandant of the school from September 1945 to October 1947, followed by service as Military Governor of South Korea from October 1947 to August 1948. Gen Dean was Commanding General of the 7th Infantry Division in South Korea and then Japan from September 1948 to June 1949, and then served as Chief of Staff of 8th U.S. Army in Japan from June to October 1949. His next assignment was as Commanding General of the 24th Infantry Division in Japan from October 1949 to July 1950, when he deployed with the division to South Korea at the outbreak of the Korean War. Gen Dean was separated from his division on July 20, 1950, and while trying to get back to Allied lines he was captured and taken as a Prisoner of War on August 25, 1950. After spending 1,107 days in captivity, Gen Dean was released during Operation Big Switch on September 4, 1953. He was the highest ranking U.S. Military person captured during the Korean War. He was briefly hospitalized to recover from his mistreatment, and then served as Deputy Commanding General of U.S. 6th Army at the Presidio of San Francisco, California, from December 1953 until his retirement from the Army on November 1, 1955. William Dean died on August 24, 1981, and was buried at the San Francisco National Cemetery in San Francisco, California.

Maj. Gen. Dean distinguished himself by conspicuous gallantry and intrepidity at the repeated risk of his life above and beyond the call of duty. In command of a unit suddenly relieved from occupation duties in Japan and as yet untried in combat, faced with a ruthless and determined enemy, highly trained and overwhelmingly superior in numbers, he felt it his duty to take action which to a man of his military experience and knowledge was clearly apt to result in his death. He personally and alone attacked an enemy tank while armed only with a hand grenade. He also directed the fire of his tanks from an exposed position with neither cover nor concealment while under observed artillery and small-arm fire. When the town of Taejon was finally overrun he refused to insure his own safety by leaving with the leading elements but remained behind organizing his retreating forces, directing stragglers, and was last seen assisting the wounded to a place of safety. These actions indicate that Maj. Gen. Dean felt it necessary to sustain the courage and resolution of his troops by examples of excessive gallantry committed always at the threatened portions of his frontlines. The magnificent response of his unit to this willing and cheerful sacrifice, made with full knowledge of its certain cost, is history. The success of this phase of the campaign is in large measure due to Maj. Gen. Dean’s heroic leadership, courageous and loyal devotion to his men, and his complete disregard for personal safety.