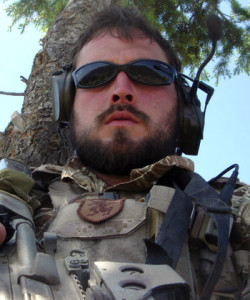 Matt Mills was born on October 25, 1975, in Austin, Texas. He enlisted in the U.S. Navy on September 12, 1996, and went on active duty to begin basic training on January 2, 1997. After completing basic training at NTC Great Lakes, Illinois, in March 1997, he attended Operations Specialist training at the Fleet Combat Training Center Atlantic at Dam Neck Annex, Virginia, from March to June 1997. His first assignment was as an operations specialist aboard the destroyer USS Kinkaid (DD-965) from June 1997 to June 2000, followed by Basic Underwater Demolition/SEAL at NAB Coronado, California, from June 2000 to March 2001. Petty Officer Mills attended Jump School at Fort Benning, Georgia, in April and May 2001, and then SEAL Qualification Training from May to August 2001. His next assignment was with SEAL Team THREE at NAB Coronado from September 2001 to March 2005, and during this time he deployed in support of Operation Iraqi Freedom in 2003. His final assignment was with Naval Special Warfare Development Group (DEVGRU) at Dam Neck Annex from March 2005 until he was killed in action when the CH-47 Chinook helicopter he was aboard was shot down in Afghanistan on August 6, 2011. During this time, Petty Officer Mills served as a Close Quarters Combat Instructor with Naval Special Warfare Group TWO Training Detachment from September 2005 to June 2006, he served with Tactical Development and Evaluation Squadron THREE with DEVGRU from August 2006 to January 2008, and he deployed to Afghanistan in support of Operation Enduring Freedom multiple times. He was buried at Arlington National Cemetery.

For heroic achievement in connection with combat operations against the enemy as an Assault Team Member for a Joint Task Force in support of Operation ENDURING FREEDOM from 18 March 2010 to 1 July 2010. During this period, Chief Petty Officer Mills consistently and deliberately exposed himself to enemy fire during several direct action missions targeting enemy leadership that resulted in the elimination of numerous enemies and the detention of many others. On 4 April 2010, Chief Petty Officer Mills served as the lead breacher during a daring nighttime raid targeting a heavily armed, foreign fighter commander. After setting containment on the target, Chief Petty Officer Mills positioned his breach team only feet from the armed enemy who were hiding in a small building. When the assault force came under heavy fire from inside the building, Chief Petty Officer Mills directed his team to explosively breach the external wall of the room containing the barricaded fighters, while he breached the main gat to gain access to the front. From the breach points, he and his teammates engaged the enemy with grenades and small arms fire that resulted in the elimination of the enemy commander and many of his heavily armed fighters. By his extraordinary guidance, zealous initiative, and total dedication to duty, Chief Petty Officer Mills reflected great credit upon himself and upheld the highest traditions of the United States Naval Service.