Stanley Christianson was born on January 24, 1925, in Mindoro, Wisconsin. He enlisted in the U.S. Marine Corps on October 2, 1942, and deployed to the Pacific with the 2nd Marine Division in February 1943, where he participated in combat on Tarawa, Saipan, Tinian, and Okinawa. At the end of the war, he served on occupation duty in Japan before returning to the United States and receiving an honorable discharge on December 8, 1945. Cpl Christianson returned to active duty on March 1, 1946, and served at NAS Pensacola, Florida, from March to August 1946, and then at NAS St. Simons, Georgia, from August to October 1946. His next assignment was as a Drill Instructor at Parris Island, South Carolina, from October 1946 to February 1947, staying on at Parris Island in other duties until September 1948. He then served at Naval Ammunition Depot Hastings, Nebraska, at the Brooklyn Navy Yard in Brooklyn, New York, and at Camp Lejeune, North Carolina, before deploying to Korea with the 1st Marine Division in August 1950. Cpl Christianson was killed in action on September 29, 1950, and was buried at the Wet Coulee Cemetery in Mindoro, Wisconsin.

For conspicuous gallantry and intrepidity at the risk of his life above and beyond the call of duty while serving with Company E, in action against enemy aggressor forces at Hill 132, in the early morning hours. Manning 1 of the several listening posts covering approaches to the platoon area when the enemy commenced the attack, Pfc. Christianson quickly sent another marine to alert the rest of the platoon. Without orders, he remained in his position and, with full knowledge that he would have slight chance of escape, fired relentlessly at oncoming hostile troops attacking furiously with rifles, automatic weapons, and incendiary grenades. Accounting for 7 enemy dead in the immediate vicinity before his position was overrun and he himself fatally struck down, Pfc. Christianson, by his superb courage, valiant fighting spirit, and devotion to duty, was responsible for allowing the rest of the platoon time to man positions, build up a stronger defense on that flank, and repel the attack with 41 of the enemy destroyed, many more wounded, and 3 taken prisoner. His self-sacrificing actions in the face of overwhelming odds sustain and enhance the finest traditions of the U.S. Naval Service. Pfc. Christianson gallantly gave his life for his country. 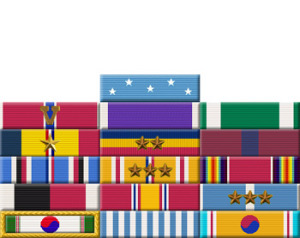