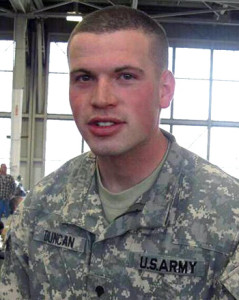 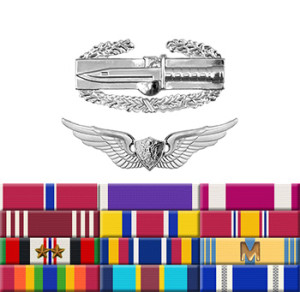 Spencer Duncan was born on February 19, 1990, in Merriam, Kansas. He enlisted in the U.S. Army Reserve on June 10, 2008, and went on active duty to begin basic training on August 28, 2008. Pvt Duncan completed basic training at Fort Knox, Kentucky, in November 2008, followed by Advanced Individual Training as a CH-47 Chinook helicopter repairer at Fort Eustis, Virginia, in April 2009. His first assignment was as a CH-47 helicopter repairer and door gunner with Company B and D, 7th Battalion of the 158th Aviation Regiment in New Century, Kansas, from April 2009 until he was killed in action aboard his CH-47 call sign Extortion 17 while deployed to Afghanistan on August 6, 2011. SPC Duncan was activated with his unit on May 9, 2011, and deployed to Afghanistan from May 2011 until his death. Spencer Duncan was buried at Fort Leavenworth National Cemetery on Fort Leavenworth, Kansas.

For meritorious service from 13 May 2011 to 6 August 2011, while assigned to Company D, 7th Battalion, 158th Aviation Regiment, during Operation Enduring Freedom. Specialist Duncan’s commitment contributed to our Nation’s continual war on terrorism and his actions represented his dedication to the security of the United States of America. His sincere desire to bring peace and stability to a foreign nation is an example of what all American Soldiers strive to achieve. No greater honor can be demonstrated by his ultimate sacrifice, and he will be forever remembered for his actions. Specialist Duncan’s duty performance and selfless service are in keeping with the highest traditions of military service and reflect great credit upon himself, the United States Forces – Afghanistan, and the United States Army.

For exceptionally meritorious service as a CH47D Door Gunner in B Company, 7th Battalion, 158th Aviation Regiment, 11th Aviation Command. Specialist Duncan demonstrated unwavering dedication, outstanding professionalism and tireless commitment to excellence. His courage, sense of duty, and selfless service directly contributed to the overall success of the unit’s mission. The significant achievement and devotion to duty of Specialist Duncan reflect great credit upon him, his command, and the United States Army.