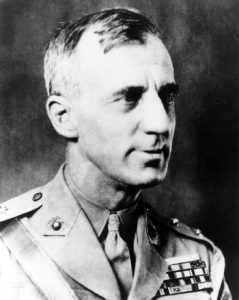 Smedley Butler was born on July 30, 1881, in West Chester, Pennsylvania. He was commissioned a 2d Lt in the U.S. Marine Corps at age 16 on June 22, 1898, and served in Guantanamo, Cuba, during the Spanish-American War. Butler served in China during the Boxer Rebellion in 1900, and became only one of 20 Marines ever to receive a brevet promotion during this time, which later earned him the Marine Corps Brevet Medal. Butler served in Honduras in 1903, and in the Occupation of Nicaragua from 1909 to 1912, followed by the Occupation of Veracruz, Mexico, in 1914, where he received his 1st Medal of Honor. Maj Butler received a 2nd Medal of Honor during the Occupation of Haiti in 1915, making him the only person in history to have been awarded the Medal of Honor twice as well as the Marine Corps Brevet Medal. During World War I, Gen Butler commanded Camp Pontanezen in Brest, France, followed by service as Commanding General of the Marine Barracks in Quantico, Virginia, from 1919 to January 1924. He received a leave of absence from the Marine Corps from January 1924 to December 1925, during which time he served as the Director of Public Safety for Philadelphia, Pennsylvania. Gen Butler served as Commander of the Marine Expeditionary Force in China from 1927 to 1929, and then returned to Quantico as Commanding General, where he retired from the Marine Corps on October 1, 1931. He died on June 21, 1940, and was buried at Oaklands Cemetery in West Chester, Pennsylvania. The World War II destroyer USS Butler (DD-636) was named in his honor.

As Commanding Officer of detachments from the 5th, 13th, 23d Companies and the Marine and sailor detachment from the U.S.S. Connecticut, Major Butler led the attack on Fort Riviere, Haiti, 17 November 1915. Following a concentrated drive, several different detachments of marines gradually closed in on the old French bastion fort in an effort to cut off all avenues of retreat for the Caco bandits. Reaching the fort on the southern side where there was a small opening in the wall, Major Butler gave the signal to attack and marines from the 15th Company poured through the breach, engaged the Cacos in hand-to-hand combat, took the bastion and crushed the Caco resistance. Throughout this perilous action, Major Butler was conspicuous for his bravery and forceful leadership. Smedley Butler earned his FIRST award of the Medal of Honor during the Mexico Incursion at Vera Cruz in 1914. Others earning Medals of Honor for heroism in this action were: Sergeant Ross Iams and Private Samuel Gross.