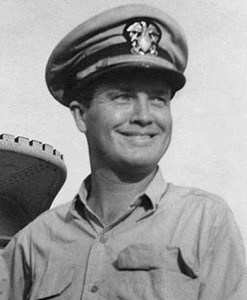 Sam Dealey was born on September 13, 1906, in Dallas, Texas. He entered the U.S. Naval Academy in 1926 and was commissioned an Ensign upon graduation in June 1930. His first assignment was aboard the battleship USS Nevada (BB-36) from June 1930 to March 1934, followed by service aboard the destroyer USS Rathburne (DD-113) until the summer of 1934, when he entered the Submarine School at New London, Connecticut. After completing submarine training, LT Dealey served aboard the submarines USS S-34 (SS-139), USS S-24 (SS-129), USS Nautilius (SS-168), and USS Bass (SS-164). He served as Aide to the Executive Officer at NAS Pensacola, Florida, from May 1937 to June 1939, and then served as Executive Officer aboard the battleship USS Wyoming (BB-32) followed by Executive Officer of the destroyer USS Reuben James (DD-245) until April 1941. CDR Dealey served as commanding officer of the submarine USS S-20 (SS-125) from April 1941 to December 1942, and then reported to fit out and then command the submarine USS Harder (SS-257). He commanded USS Harder from December 1942, and participated in six successful War Patrols in the Pacific before he was killed in action when his submarine was sunk by Japanese forces off of Dasol Bay in the Philippines on August 24, 1944. Dealey Plaza in Dallas, Texas, is named in his honor.

For conspicuous gallantry and intrepidity at the risk of his life above and beyond the call of duty as Commanding Officer of the U.S.S. Harder during her 5th War Patrol in Japanese-controlled waters. Floodlighted by a bright moon and disclosed to an enemy destroyer escort which bore down with intent to attack, Comdr. Dealey quickly dived to periscope depth and waited for the pursuer to close range, then opened fire, sending the target and all aboard down in flames with his third torpedo. Plunging deep to avoid fierce depth charges, he again surfaced and, within 9 minutes after sighting another destroyer, had sent the enemy down tail first with a hit directly amidship. Evading detection, he penetrated the confined waters off Tawi Tawi with the Japanese Fleet base 6 miles away and scored death blows on 2 patrolling destroyers in quick succession. With his ship heeled over by concussion from the first exploding target and the second vessel nose-diving in a blinding detonation, he cleared the area at high speed. Sighted by a large hostile fleet force on the following day, he swung his bow toward the lead destroyer for another “down-the-throat” shot, fired 3 bow tubes and promptly crash-dived to be terrifically rocked seconds later by the exploding ship as the Harder passed beneath. This remarkable record of 5 vital Japanese destroyers sunk in 5 short-range torpedo attacks attests the valiant fighting spirit of Comdr. Dealey and his indomitable command.