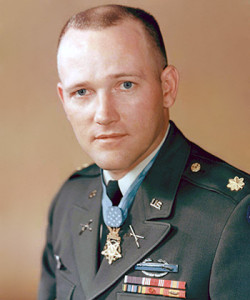 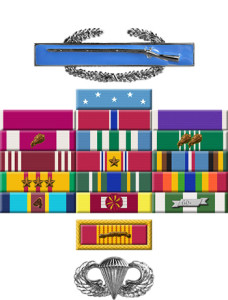 Roger Donlon was born on January 30, 1934, in Saugerties, New York. He enlisted in the U.S. Air Force on December 16, 1953, and completed basic training at Sampson AFB, New York, in January 1954. Airman Donlon served at Stewart AFB, New York, where he attended the U.S. Military Academy Prep School before receiving an honorable discharge to attend West Point on July 4, 1955. He entered the U.S. Military Academy on July 5, 1955, but left before graduating. Donlon enlisted in the U.S. Army on February 5, 1958, and was commissioned a 2d Lt in the U.S. Army through the Infantry Officer Candidate School at Fort Benning, Georgia, on June 24, 1959. Lt Donlon next attended Airborne School, followed by service as a training officer, executive officer, and company commander with the 5th Training Regiment at Fort Jackson, South Carolina, from August 1959 to July 1961. He served as a platoon leader with Company E, 1st Brigade of the 9th Infantry Regiment in Alaska from July 1961 to March 1962, and then as Aide-de-Camp to the commander of Yukon Command in Alaska from March 1962 to August 1963. Capt Donlon next served as an adjutant with Detachment C-1, Company A, 7th Special Forces Group at Fort Bragg, North Carolina, from August 1963 to January 1964, followed by service as Commanding Officer of Detachment A-26, Company C, 7th Special Forces Group at Fort Bragg from January to November 1964. During time he deployed with his unit to South Vietnam from May to November 1964. He served with Headquarters 7th Special Forces Group at Fort Bragg from November 1964 to August 1965, and then attended the Infantry Officer Career Course at Fort Benning from August 1965 to May 1966. Maj Donlon received an assignment to complete his bachelor’s degree at the University of Omaha, Nebraska, from May 1966 to March 1967, followed by service as Commandant of the Advanced Combat Training Academy with 2nd Battalion, 9th Infantry Regiment of the 2nd Infantry Division in South Korea from May 1967 to June 1968. He served as Assistant G-3 Training Officer with the 5th Infantry Division at Fort Carson, Colorado, from August 1968 to July 1970, and then attended Command and General Staff College at Fort Leavenworth, Kansas, from August 1970 to June 1971. Maj Donlon attended training at the Foreign Service Institute in Washington, D.C., from July to November 1971, and then served as a training advisor with U.S. Military Assistance Command Vietnam from January to August 1972, and with U.S. Military Assistance Command Thailand from September 1972 to May 1974. LTC Donlon’s next assignment was as a Service Test Project Officer with the U.S. Army Infantry Board at Fort Benning from June 1974 to January 1976, followed by service with the School Brigade at Fort Benning from January to December 1976. He served as Battalion Commander of 3rd Special Forces Battalion, 7th Special Forces Group in the Panama Canal Zone from January 1977 to August 1978, and then as an Instructor and as Director of Allied Personnel at U.S. Army Command and General Staff College at Fort Leavenworth from August 1978 to July 1981. Col Donlon attended the Defense Language Institute Foreign Language School at the Presidio of Monterey, California, from September 1981 to May 1982, followed by the Foreign Area Officer Course at Fort Bragg from July to December 1982. He received an assignment to complete his graduate studies at Campbell University from December 1982 to July 1983, and then attended additional training at the John F. Kennedy Special Warfare School at Fort Bragg from July to November 1983. Col Donlon served as Commander of the U.S. Army Element to the United Nations Command in Japan from November 1983 to August 1987, and then as Alternate President to the Physical Evaluation Board at the the Presidio of San Francisco from August 1987 until his retirement from the Army on December 17, 1988. Col Donlon was the first recipient of the Medal of Honor for action during the Vietnam War, and he was also the first Special Forces soldier in history to be awarded the Medal of Honor.

For conspicuous gallantry and intrepidity at the risk of his life above and beyond the call of duty while defending a U.S. military installation against a fierce attack by hostile forces. Capt. Donlon was serving as the commanding officer of the U.S. Army Special Forces Detachment A-726 at Camp Nam Dong when a reinforced Viet Cong battalion suddenly launched a full-scale, predawn attack on the camp. During the violent battle that ensued, lasting 5 hours and resulting in heavy casualties on both sides, Capt. Donlon directed the defense operations in the midst of an enemy barrage of mortar shells, falling grenades, and extremely heavy gunfire. Upon the initial onslaught, he swiftly marshaled his forces and ordered the removal of the needed ammunition from a blazing building. He then dashed through a hail of small arms and exploding hand grenades to abort a breach of the main gate. En route to this position he detected an enemy demolition team of 3 in the proximity of the main gate and quickly annihilated them. Although exposed to the intense grenade attack, he then succeeded in reaching a 60mm mortar position despite sustaining a severe stomach wound as he was within 5 yards of the gun pit. When he discovered that most of the men in this gunpit were also wounded, he completely disregarded his own injury, directed their withdrawal to a location 30 meters away, and again risked his life by remaining behind and covering the movement with the utmost effectiveness. Noticing that his team sergeant was unable to evacuate the gun pit he crawled toward him and, while dragging the fallen soldier out of the gunpit, an enemy mortar exploded and inflicted a wound in Capt. Donlon’s left shoulder. Although suffering from multiple wounds, he carried the abandoned 60mm mortar weapon to a new location 30 meters away where he found 3 wounded defenders. After administering first aid and encouragement to these men, he left the weapon with them, headed toward another position, and retrieved a 57mm recoilless rifle. Then with great courage and coolness under fire, he returned to the abandoned gun pit, evacuated ammunition for the 2 weapons, and while crawling and dragging the urgently needed ammunition, received a third wound on his leg by an enemy hand grenade. Despite his critical physical condition, he again crawled 175 meters to an 81mm mortar position and directed firing operations which protected the seriously threatened east sector of the camp. He then moved to an eastern 60mm mortar position and upon determining that the vicious enemy assault had weakened, crawled back to the gun pit with the 60mm mortar, set it up for defensive operations, and turned it over to 2 defenders with minor wounds. Without hesitation, he left this sheltered position, and moved from position to position around the beleaguered perimeter while hurling hand grenades at the enemy and inspiring his men to superhuman effort. As he bravely continued to move around the perimeter, a mortar shell exploded, wounding him in the face and body. As the long awaited daylight brought defeat to the enemy forces and their retreat back to the jungle leaving behind 54 of their dead, many weapons, and grenades, Capt. Donlon immediately reorganized his defenses and administered first aid to the wounded. His dynamic leadership, fortitude, and valiant efforts inspired not only the American personnel but the friendly Vietnamese defenders as well and resulted in the successful defense of the camp. Capt. Donlon’s extraordinary heroism, at the risk of his life above and beyond the call of duty are in the highest traditions of the U.S. Army and reflect great credit upon himself and the Armed Forces of his country.