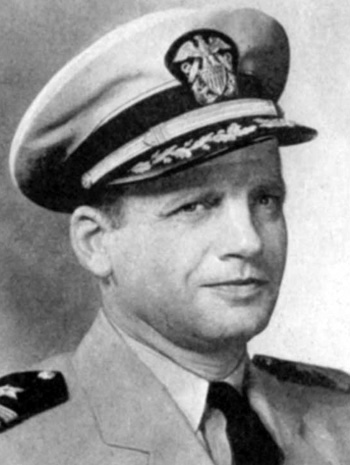 Richard Antrim was born on December 17, 1907, in Peru, Indiana. He enlisted in the U.S. Naval Reserve on June 28, 1926, and entered the U.S. Naval Academy on June 20, 1927. Antrim graduated and was commissioned an Ensign in the U.S. Navy on June 4, 1931, and served aboard the battleship USS New York (BB-34) from August 1931 to April 1932. He then served aboard the oiler USS Salinas (AO-19), the ammunition ship USS Nitro (AE-2), and the light cruiser USS Trenton (CL-11) between June and November 1932, before serving on shore assignments in Quincy, Massachusetts, and Washington, D.C., between November 1932 and February 1933. Lt Antrim served as Division Officer aboard the heavy cruiser USS Portland (CA-33) from February 1933 to April 1936, followed by service aboard the destroyer USS Crowninshield (DD-134) from April to June 1936. He next served at NAS Lakehurst, New Jersey, where he trained to fly airships. His next assignment was as Executive Officer on the minesweeper USS Bittern (AM-36) from May 1938 to December 1939, and then Executive Officer of the destroyer USS Pope (DD-225) from December 1939 until he was captured and taken as a Prisoner of War on March 4, 1942. CDR Antrim was released from captivity at the end of the war in September 1945, and then took rehabilitation leave until March 1946. He served in Washington, D.C., and at NAS Lakehurst before attending Naval War College at Newport, Rhode Island, from June 1946 to June 1947. Antrim next attended Fleet Sonar School before serving as Commander of the destroyer USS Turner (DD-834) from July 1947 to October 1948. His next assignment was back at NAS Lakehurst from October to December 1948, followed by service as Assistant for Lighter than Air Planning and Programs at Headquarters U.S. Navy in the Pentagon from December 1948 to October 1950. He served on the Department of State Policy Advisory Staff from October 1950 to October 1951, and then on the Psychological Strategy Board until August 1952. CAPT Antrim next commanded the attack transport USS Montrose (APA-212) during the Korean War from August 1952 to June 1953, followed by service as Head of the Naval Amphibious Warfare Matters Section in the Office of the Chief of Naval Operations from June to August 1953. After spending time in the U.S. Naval Hospital at Bethesda, Maryland, Antrim was medically retired and advanced to Rear Admiral on April 1, 1954. He died on March 7, 1969, and was buried at Arlington National Cemetery, having been the only Prisoner of War during World War II to have been awarded the Medal of Honor for action during his captivity. The guided missile frigate USS Antrim (FFG-20) was named in his honor.

For conspicuous gallantry and intrepidity at the risk of his life above and beyond the call of duty while interned as a prisoner of war of the enemy Japanese in the city of Makassar, Celebes, Netherlands East Indies, in April 1942. Acting instantly on behalf of a naval officer who was subjected to a vicious clubbing by a frenzied Japanese guard venting his insane wrath upon the helpless prisoner, Comdr. (then Lt.) Antrim boldly intervened, attempting to quiet the guard and finally persuading him to discuss the charges against the officer. With the entire Japanese force assembled and making extraordinary preparations for the threatened beating, and with the tension heightened by 2,700 Allied prisoners rapidly closing in, Comdr. Antrim courageously appealed to the fanatic enemy, risking his own life in a desperate effort to mitigate the punishment. When the other had been beaten unconscious by 15 blows of a hawser and was repeatedly kicked by 3 soldiers to a point beyond which he could not survive, Comdr. Antrim gallantly stepped forward and indicated to the perplexed guards that he would take the remainder of the punishment, throwing the Japanese completely off balance in their amazement and eliciting a roar of acclaim from the suddenly inspired Allied prisoners. By his fearless leadership and valiant concern for the welfare of another, he not only saved the life of a fellow officer and stunned the Japanese into sparing his own life but also brought about a new respect for American officers and men and a great improvement in camp living conditions. His heroic conduct throughout reflects the highest credit upon Comdr. Antrim and the U.S. Naval Service.