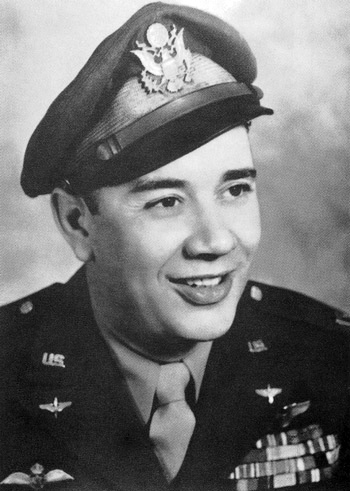 Dixie Alexander was born on July 22, 1914, in Grant Park, Illinois. He joined the Royal Canadian Air Force in October 1940, and was awarded his pilot wings on September 15, 1941, joining the 133 Eagle Squadron in England. Alexander was credited with destroying 1 enemy aircraft in aerial combat, plus 1 probable, before transferring to the U.S. Army Air Forces and joining the 4th Fighter Group on September 23, 1942. He joined the 109th Observation Squadron in January 1943, and then the 2nd Fighter Squadron of the 52nd Fighter Group in North Africa in April 1943. Lt Alexander destroyed another 4 enemy aircraft in the air from February to May 1944, giving him a total of 5 destroyed and 1 probable for World War II. He was shot down and taken as a Prisoner of War on May 30, 1944, and was held until his camp was liberated in May 1945. While serving with the 60th Fighter Squadron of the 33rd Fighter Group in Germany in January 1947, he was involved in an accident and lost his right arm. Capt Alexander was medically retired from the Air Force on February 7, 1948. Dixie Alexander died on April 19, 1993.

For extraordinary achievement in aerial flight as pilot of a P-51 type aircraft. On 24 May 1944 Lt. Alexander participated as escort to heavy bombers attacking enemy installations in Austria. Turning from the target after a highly successful bombing run the bomber formation was attacked from the rear by five (5) enemy fighters. With complete disregard for the overwhelming odds Lt. Alexander immediately turned into the enemy aircraft forcing them to break off their attacks. In the ensuing engagement he singled out one (1) enemy fighter and through outstanding combat skill he succeeded in destroying it. Rejoining his formation he escorted the bombers safely to base without loss. By his outstanding courage, combat proficiency and devotion to duty together with personal combat record of three (3) enemy aircraft destroyed and over sixty five (65) successful missions against the enemy Lt. Alexander has upheld the highest traditions of the Military service thereby reflecting great credit upon himself and the Armed Forces of the United States of America.