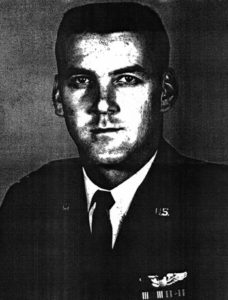 Richard Allee was born on December 14, 1935, in Port Jervis, New York. He enlisted in the U.S. Air Force on July 18, 1955, and was trained as an aircraft mechanic. Allee entered the Aviation Cadet Program on February 12, 1957, and was commissioned a 2Lt and awarded his pilot wings on June 12, 1958. Lt Allee next went through B-47 Stratojet combat crew training, and then was assigned to Whiteman AFB, Missouri, as a B-47 pilot. In August 1963, Capt Allee was transferred to Lockbourne AFB, Ohio, where he flew B-47s with the 352nd Bomb Squadron. He next transitioned into flying C-47 transports with the 605th Air Commando Squadron at Howard AFB, Panama, from July 1964 to March 1968. Allee then became an F-105 Thunderchief pilot and was assigned to the 354th Tactical Fighter Squadron at Takhli Royal Thai AFB, Thailand. He flew combat missions in Southeast Asia from April 1968 until his aircraft was shot down on December 21, 1968. Major Allee was listed as Missing in Action until August 17, 1979, when his status was changed to Killed in Action. During this time, he was promoted to Colonel. His remains were returned to the United States on December 23, 1996.

The President of the United States of America, authorized by Title 10, Section 8742, United States Code, awards the Air Force Cross to Major Richard K. Allee for extraordinary heroism in military operations against an opposing armed force as an F-105 Thunderchief pilot over Southeast Asia on 21 December 1968. On that date, Major Allee was attacking an extremely important supply and storage area containing a large concentration of unfriendly forces and located in one of the most heavily defended areas in Southeast Asia. During the initial phase of his dive bombing attack, Major Allee’s aircraft sustained critical damage from lethal antiaircraft artillery fire defending this important target. Although his aircraft was burning, he demonstrated professional dedication and exceptional valor by continuing his attack and delivering his ordnance directly on target. Knowing that his mission was now accomplished, Major Allee attempted recover from his dive bombing attack but the severity of the damage sustained by his aircraft made recovery unsuccessful and his aircraft was observed impacting in the immediate target area. Through his superb airmanship, aggressiveness, and extraordinary heroism, Major Allee reflected the highest credit upon himself and the United States Air Force. 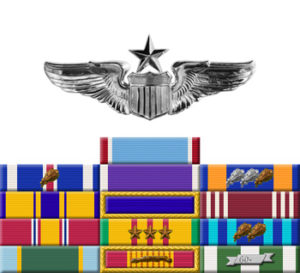