You are here: Home › Tributes › #imnohero: Richard I. Bong. USAF, Medal of Honor 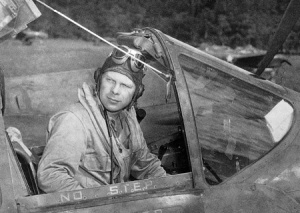 Dick Bong was born on September 24, 1920, in Superior, Wisconsin. He enlisted as an Aviation Cadet in the U.S. Army Air Corps on May 29, 1941, and was commissioned a 2Lt and awarded his pilot wings on January 9, 1942. Lt Bong’s first assignment was as an instructor pilot at Luke Field, Arizona, from January to May 1942, followed by transition training in the P-38 Lightning at Hamilton Field, California. He was next assigned to the 9th Fighter Squadron of the 49th Fighter Group in Australia in September 1942, and then was reassigned to the 39th Fighter Squadron of the 35th Fighter Group in November 1942. Bong returned to the 9th Fighter Squadron in January 1943, where he served until November 1943. After two months of leave in the U.S., Bong was assigned to Headquarters of 5th Air Force Fighter Command in New Guinea, where he continued to fly combat missions on a voluntary basis. From April to September 1944, Maj Bong served at Foster Field, Texas, and went through additional gunnery training. He returned to 5th Fighter Command in September and by December he had 40 total aerial victory credits, making him the highest scoring Ace in U.S. history (he also had 10 probable air victories). Maj Bong returned to the U.S. in late December 1944 and was assigned as a test pilot with the 4020th Army Air Force Base Unit at Wright Field, Ohio, followed by a transfer to Burbank, California, in June 1945, where he served as Chief of Flight Operations at the Office of the Army Air Force Plant Representative in the Lockheed Aircraft Plant. Richard Bong was killed on August 6, 1945, when the P-80 Shooting Star he was flying crashed near Burbank, California. Dick and his wife, the former Margorie Vattendahl, had been married on February 10, 1945.

For conspicuous gallantry and intrepidity in action above and beyond the call of duty in the Southwest Pacific area from 10 October to 15 November 1944. Though assigned to duty as gunnery instructor and neither required nor expected to perform combat duty, Maj. Bong voluntarily and at his own urgent request engaged in repeated combat missions, including unusually hazardous sorties over Balikpapan, Borneo, and in the Leyte area of the Philippines. His aggressiveness and daring resulted in his shooting down 8 enemy airplanes during this period. 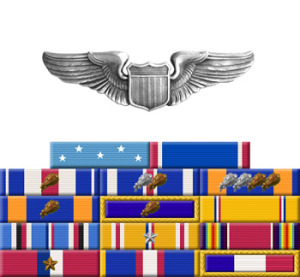