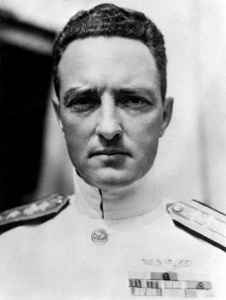 Richard Byrd was born on October 25, 1888, in Winchester, Virginia. He served in the Battleship fleet until 1916, when he was medically retired, but soon returned to active duty in a retired status, where he organized the Commission on Training Camps. He then completed flight training and was designated Naval Aviator number 608 in April 1918. Byrd served in Canada as Commander of U.S. Naval Air Forces during World War I, and then after the war he served in Washington, D.C., where he was responsible for the navigational preparations for the transatlantic flight attempt of the NC flying boats in 1919. He flew over the interior of Greenland in 1925 and was the first person credited with flying over the North Pole on May 9, 1926. For this feat he was awarded a rare Peacetime Medal of Honor. Byrd left active duty in 1927, and led an expedition to Antarctica from 1928 to 1930, and during this time he made the first flight over the South Pole in November 1929. He led a 2nd expedition to Antarctica from 1933 to 1935, and a 3rd one from 1939 to 1940. Byrd was recalled to active duty with the Navy in March 1940, and served in the Office of the Chief of Naval Operations throughout the war, mainly serving as a consultant and surveying areas in both the Pacific Theater and the European Theater. ADM Byrd led Operation Highjump to Antarctica in 1946, and again retired from active duty in 1947. He was put in charge of U.S. Antarctic programs in 1956 and died at his home in Boston, Massachusetts, on March 11, 1957. Richard Byrd is buried with his wife Marie at Arlington National Cemetery.

For distinguishing himself conspicuously by courage and intrepidity at the risk of his life, in demonstrating that it is possible for aircraft to travel in continuous flight from a now inhabited portion of the earth over the North Pole and return. 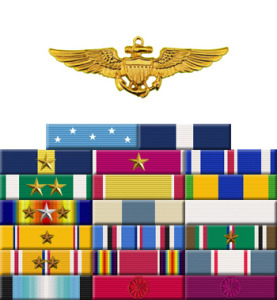