Randolph Berkeley was born on January 9, 1875, in Staunton, Virginia. He was commissioned a 2d Lt in the U.S. Marine Corps on August 8, 1898, and was stationed at the Washington Navy Yard until discharged on January 9, 1899. Lt Berkeley returned to active duty in April 1899, and served aboard the battleship USS Oregon (BB-3) from October 1899 to March 1901, followed by service in the Philippines from April to June 1901. His next assignment was aboard the gunboat USS Helena (PG-9) from July 1901 to August 1902, and then on expeditionary duty in Panama from December 1904 to August 1906. Capt Berkeley served on expeditionary duty in Cuba from September to October 1906, and then served as commander of the Marine Detachment aboard the battleship USS Kentucky (BB-6) until November 1908. He served in the Philippines and China from December 1908 to October 1910, and later commanded the 1st Battalion, 2nd Advanced Base Regiment from December 1913 to December 1914. During this time, Maj Berkeley deployed with his battalion to Vera Cruz from March to December 1914. His next assignment was in Philadelphia, Pennsylvania, from December 1914 to June 1915, followed by service as commander of the Marine Barracks on Guam from June 1915 to November 1917. During World War I, Col Berkeley served at the Marine Barracks in New York City and Charleston, South Carolina. He served on expeditionary duty with the 1st Provisional Brigade in Haiti from October 1919 to November 1921, and then served in New York City, Norfolk, Virginia, and Quantico, Virginia, from November 1921 to May 1928. During this time, Col Berkeley commanded the 11th Regiment in Nicaragua from May to August 1927. His next assignment was as Chief of Staff of the 2nd Marine Brigade in Nicaragua from May 1928 to April 1929, followed by service as commander of the Marine Barracks at the Norfolk Navy Yard from April 1929 to August 1930. He commanded the Marine Corps School in Quantico from August 1930 to November 1931, and then returned to Nicaragua as commander of the 2nd Marine Brigade from November 1931 to January 1933. Gen Berkeley next commanded the Marine Barracks at Parris Island, South Carolina, from January 1933 to May 1936, and then served as President of the Marine Corps Examining and Retiring Boards from May 1936 to December 1938. He retired from the Marine Corps in January 1939. Randolph Berkeley died on January 31, 1960, and was buried at Arlington National Cemetery.

For distinguished conduct in battle, engagements of Vera Cruz, April 21st and 22nd, 1914; was eminent and conspicuous in command of his battalion; was in the fighting of both days, and exhibited courage and skill in leading his men through action. His cool judgement and courage and his skill in handling his men in encountering and overcoming the machine gun and rifle fire down Cinco de Mayo and parallel streets accounts for the small percentage of the losses of Marines under his command. 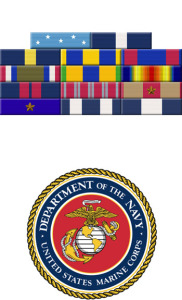