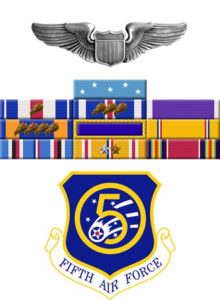 Neel Kearby was born on June 5, 1911, in Wichita Falls, Texas. He graduated from the University of Texas with a bachelor’s degree in Business Administration before enlisting in the Aviation Cadet Program of the U.S. Army Air Corps on February 25, 1937. Kearby was commissioned a 2d Lt and awarded his pilot wings on February 16, 1938, and then served with the 94th and 40th Pursuit Squadrons of the 1st Pursuit Group at Selfridge Field, Michigan, until December 1940. Kearby commanded the 14th Pursuit Squadron in the Panama Canal Zone from December 1940 to August 1942, and then became commander of the 348th Fighter Group at Mitchel Field, New York, in October 1942. He deployed with the group to New Guinea in May 1943, and was credited with the destruction of 12 enemy aircraft in aerial combat before transferring to 5th Fighter Command in November 1943. Col Kearby destroyed another 10 enemy aircraft in the air, plus 2 damaged, before he was killed in action bailing out of his stricken P-47 Thunderbolt on March 5, 1944. His remains were found in 1947, and were returned to the United States in June 1949. Neel Kearby is buried at Hillcrest Memorial Park in Dallas, Texas.

For conspicuous gallantry and intrepidity above and beyond the call of duty in action with the enemy, Col. Kearby volunteered to lead a flight of 4 fighters to reconnoiter the strongly defended enemy base at Wewak. Having observed enemy installations and reinforcements at 4 airfields, and secured important tactical information, he saw an enemy fighter below him, made a diving attack and shot it down in flames. The small formation then sighted approximately 12 enemy bombers accompanied by 36 fighters. Although his mission had been completed, his fuel was running low, and the numerical odds were 12 to 1, he gave the signal to attack. Diving into the midst of the enemy airplanes he shot down 3 in quick succession. Observing 1 of his comrades with 2 enemy fighters in pursuit, he destroyed both enemy aircraft. The enemy broke off in large numbers to make a multiple attack on his airplane but despite his peril he made one more pass before seeking cloud protection. Coming into the clear, he called his flight together and led them to a friendly base. Col. Kearby brought down 6 enemy aircraft in this action, undertaken with superb daring after his mission was completed.