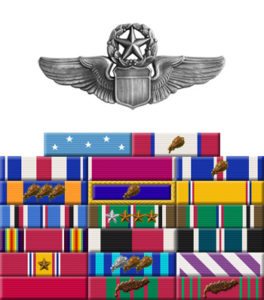 Leon Johnson was born on September 13, 1904, in Columbia, Missouri. He was commissioned through the U.S. Military Academy at West Point on June 12, 1926, and was assigned to the Army Air Corps in 1930. After completing pilot training in 1936, Johnson was assigned as the Base Weather Officer at Barksdale Field, Louisiana, from 1936 to July 1940. He served as commanding officer of the 90th Bomb Squadron at Savannah AB, Georgia, from December 1940 to May 1941, and then commanding officer of the 10th Reconnaissance Squadron, also at Savannah AB, from May to August 1941. Johnson served with the 3rd Air Support Command at Bolling FIeld, Washington, D.C., from August 1941 to January 1942, and then with the 8th Air Force from January 1942 to January 1943, when he became the commanding officer of the 44th Bomb Group. While in this command he was awarded the Medal of Honor during the attacks on the Ploesti oil fields on August 1, 1943. He commanded the 44th BG until he was made Commanding General of the 14th Combat Bomb Wing in September 1943, serving in this position until the end of the war in Europe. Johnson served with Headquarters Army Air Forces in Washington, D.C., from June 1945 to April 1947, when he became Commanding General of 15th Air Force. He served as Commanding General of the 3rd Air Division in England from August 1948 to February 1952. He was then named Commander of Continental Air Command, where he served until being assigned to the United Nations Commission in December 1955. In April 1956, Gen Johnson was assigned as the U.S. Representative to the North Atlantic Military Committee of NATO. He served as Air Deputy to the Supreme Allied Commander Europe from May 1958 until his retirement from the Air Force on July 1, 1961. General Johnson was recalled to active duty on September 15, 1961 to become the director of the Net Evaluation Subcommittee Staff on the National Security Council Staff. He retired from active duty a second time on April 30, 1965. Leon Johnson died on November 10, 1997, and was buried at Arlington National Cemetery.

For conspicuous gallantry in action and intrepidity at the risk of his life above and beyond the call of duty on 1 August 1943. Col. Johnson, as commanding officer of a heavy bombardment group, let the formation of the aircraft of his organization constituting the fourth element of the mass low-level bombing attack of the 9th U.S. Air Force against the vitally important enemy target of the Ploesti oil refineries. While proceeding to the target on this 2,400-mile flight, his element became separated from the leading elements of the mass formation in maintaining the formation of the unit while avoiding dangerous cumulous cloud conditions encountered over mountainous territory. Though temporarily lost, he reestablished contact with the third element and continued on the mission with this reduced force to the prearranged point of attack, where it was discovered that the target assigned to Col. Johnson’s group had been attacked and damaged by a preceding element. Though having lost the element of surprise upon which the safety and success of such a daring form of mission in heavy bombardment aircraft so strongly depended, Col. Johnson elected to carry out his planned low-level attack despite the thoroughly alerted defenses, the destructive antiaircraft fire, enemy fighter airplanes, the imminent danger of exploding delayed action bombs from the previous element, of oil fires and explosions, and of intense smoke obscuring the target. By his gallant courage, brilliant leadership, and superior flying skill, Col. Johnson so led his formation as to destroy totally the important refining plants and installations which were the object of his mission. Col. Johnson’s personal contribution to the success of this historic raid, and the conspicuous gallantry in action, and intrepidity at the risk of his life above and beyond the call of duty demonstrated by him on this occasion constitute such deeds of valor and distinguished service as have during our Nation’s history formed the finest traditions of our Armed Forces.