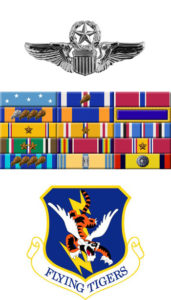 James Howard was born on April 8, 1913, in Canton, China. He enlisted in the Aviation Cadet Program of the U.S. Navy on August 5, 1937, and was commissioned an Ensign and designated a Naval Aviator on February 23, 1939. Howard served on the aircraft carriers USS Wasp, Lexington, and Enterprise before resigning his commission on June 21, 1941, to serve with the Flying Tigers in China. He was credited with shooting down 2.333 Japanese aircraft in aerial combat, plus 4 more on the ground while strafing enemy airfields, before the Flying Tigers were disbanded in July 1942. Howard returned to the United States later that month, and was commissioned a Captain in the U.S. Army Air Forces on January 31, 1943. Howard flew combat with the 354th Fighter Group in Europe from May 1943 until early 1945, adding 6 more enemy aircraft to his credit, plus 1 probable and 2 damaged, for a total of 8.333 during World War II. He was next assigned as base commander of Pinellas Army Airfield, Florida, before leaving active duty on November 30, 1945, and entering the Air Force Reserve. He was promoted to Brigadier General in the reserves on March 22, 1948, and retired from the U.S. Air Force Reserve on October 1, 1966. James Howard died on March 18, 1995, and is buried at Arlington National Cemetery.

For conspicuous gallantry and intrepidity above and beyond the call of duty in action with the enemy near Oschersleben, Germany on 11 January 1944. On that day Colonel Howard was the leader of a group of P-51 aircraft providing support for a heavy bomber formation on a long range mission deep in enemy territory. As Colonel Howard’s group met the bombers in the target area the bomber force was attacked by numerous enemy fighters. Colonel Howard, with his group, at once engaged the enemy and himself destroyed a German ME. 110. As a result of this attack Colonel Howard lost contact with his group, and at once returned to the level of the bomber formation. He then saw that the bombers were being heavily attacked by enemy airplanes and that no other friendly fighters were at hand. While Colonel Howard could have waited to attempt to assemble his group before engaging the enemy, he chose instead to attack single-handed a formation of more than thirty German airplanes. With utter disregard for his own safety he immediately pressed home determined attacks for some thirty minutes, during which time he destroyed three enemy airplanes and probably destroyed and damaged others. Toward the end of this engagement three of his guns went out of action and his fuel supply was becoming dangerously low. Despite these handicaps and the almost insuperable odds against him, Colonel Howard continued his aggressive action in an attempt to protect the bombers from the numerous fighters. His skill, courage, and intrepidity on this occasion set an example of heroism which will be an inspiration to the Armed Forces of the United States.