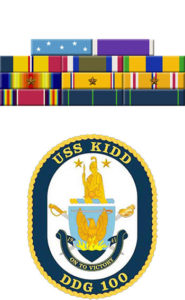 Isaac Kidd was born on March 26, 1884, in Cleveland, Ohio. He entered the U.S. Naval Academy in June 1902, and graduated as a Passed Midshipman on February 12, 1906, receiving his commission as an Ensign in the U.S. Navy after completing the two years required at sea on February 13, 1908. His first assignment was aboard the cruiser USS Columbia (CA-16) from February 1906 to May 1907, followed by service aboard the first battleship USS New Jersey (BB-16) from May 1907 to May 1910, and then aboard the battleship USS North Dakota (BB-29) from May 1910 to June 1913. LT Kidd served aboard the armored cruiser USS Pennsylvania (ACR-4) from June 1913 to August 1916, and during this time he served as Aide and Flag Secretary on the staff of the Commander-in-Chief, Pacific Fleet. His next assignment was as an instructor at the U.S. Naval Academy from August 1916 to 1918, when he transferred to the battleship USS New Mexico (BB-40), where he served during her fitting out, commissioning, and service during the last months of World War I. LT Kidd next served as Aide and Flag Lieutenant to the Commander-in-Chief, Atlantic Fleet from July 1919 to 1921, followed by service at the Naval Academy from 1921 to May 1925. He was executive officer aboard the battleship USS Utah (BB-31) from May 1925 to November 1926, and then served as commanding officer of the cargo ship USS Vega (AK-17) from November 1926 to June 1927. His next assignment was as Captain of the Port at Cristobal, Panama Canal Zone, from June 1927 to June 1930, and then as chief of staff to the Commander of Fleet Base Force from June 1930 to April 1932. From April 1932 to February 1935, Capt Kidd served as officer in charge of the Officer Detail Section of the Bureau of Navigation in Washington, D.C., followed by service as commander of Destroyer Squadron ONE from February 1935 to June 1936. He next attended Naval War College in Newport, Rhode Island, and then remained on the staff at the college until September 1938, when he assumed command of the battleship USS Arizona (BB-39). In February 1940, RADM Kidd was designated Commander of Battleship Division ONE and Chief of Staff and Aide to Commander Battleships, Battle Force, with USS Arizona as his flagship. He was killed in action in this position during the Japanese attack on Pearl Harbor on December 7, 1941. The destroyer USS Kidd (DD-661), and the guided-missile destroyers USS Kidd (DDG-993) and USS Kidd (DDG-100) were all named in his honor. RADM Kidd was the first flag officer to lose his life in World War II, and the first in the U.S. Navy to lose his life in action against any foreign enemy in the history of the United States. His son, Isaac C. Kidd, Jr., was an Admiral in the U.S. Navy, and his grandson, Isaac C. Kidd, III, was a Capt in the U.S. Navy.

For conspicuous devotion to duty, extraordinary courage and complete disregard of his own life, during the attack on the Fleet in Pearl Harbor, by Japanese forces on 7 December 1941. Rear Adm. Kidd immediately went to the bridge and, as Commander Battleship Division One, courageously discharged his duties as Senior Officer Present Afloat until the U.S.S. Arizona, his Flagship, blew up from magazine explosions and a direct bomb hit on the bridge which resulted in the loss of his life.