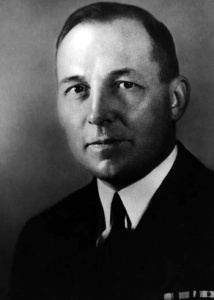 Mervyn Bennion was born on May 5, 1887, in Vernon, Utah Territory. He entered the U.S. Naval Academy in June 1906 and graduated 1st in his class with a commission as an Ensign in June 1910. His first assignment was aboard the armored cruiser USS California (ACR-6) from June 1910 to August 1912, during which time he cruised to Chile, Hawaii, the Philippines, China, and Japan. Bennion next served on the West Coast of Central America, most of the time aboard the protected cruiser USS St. Louis (C-20), from 1912 to 1915. During this time he participated in the occupation of Nicaragua and actions in Mexico. Bennion then attended post graduate school at Annapolis and at the outbreak of World War I was assigned as a gun turret officer aboard the battleship USS North Dakota (BB-29). He was then assigned to the Bureau of Ordnance in Washington, D.C., from January 1918 to 1920, before helping to fit out the battleship USS Maryland (BB-46) at Newport News, Virginia. When the Maryland was commissioned in July 1921, Brannion continued on as the Assistant Fire Control Officer until 1923, when he became Gunnery Officer aboard the battleship USS Florida (BB-30). From 1924 to 1926, he served at the naval gun proving grounds in Dahigren, Virginia, followed by two years as Gunnery Officer aboard the battleship USS Tennessee (BB-43). Brannion next trained as a Navigator and served aboard the USS Maryland again, from 1928 to 1929. From July 1929 to July 1932, he served in the Bureau of Ordnance in charge of turret design and machinery. He then Commanded the destroyer USS Bernadou (DD-153), followed by the destroyer USS Biddle (DD-151), and was then appointed commander of Destroyer Division One of the Fleet, which he commanded from the destroyer USS Hatfield (DD-231). He served in this post and then as Fleet Training Officer until 1934, when he entered the Naval War College at Newport, Rhode Island. After graduating in 1935, he continued on as an instructor until 1936. From 1936 to 1937, CDR Bennion served as Executive Officer of the battleship USS Arizona (BB-39), and then took command of the ammunition supply ship USS Nitro (AE-2). His next assignment was back in the Bureau of Ordnance, this time in charge of the financial section, from 1938 to July 1941. Capt Bennion’s final assignment was as commander of the battleship USS West Virginia (BB-48) from August 1941 until he was killed in action on her bridge during the Japanese attack on Pearl Harbor on December 7, 1941. Capt Bennion was buried at the Salt Lake City Cemetery in Salt Lake City, Utah. The destroyer USS Bennion (DD-662) was named in his honor and was launched on July 4, 1943.

For conspicuous devotion to duty, extraordinary courage, and complete disregard of his own life, above and beyond the call of duty, during the attack on the Fleet in Pearl Harbor, by Japanese forces on 7 December 1941. As Commanding Officer of the U.S.S. West Virginia, after being mortally wounded, Capt. Bennion evidenced apparent concern only in fighting and saving his ship, and strongly protested against being carried from the bridge. 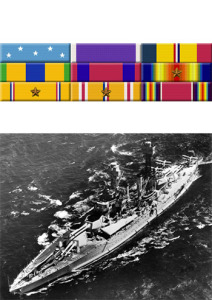