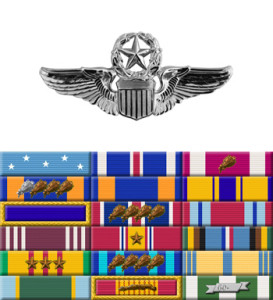 Merlyn Dethlefsen was born on June 29, 1934, in Greenville, Iowa. He enlisted in the U.S. Air Force on January 19, 1954, and was commissioned through the Aviation Cadet Program on June 8, 1955. Dethlefsen served as a Navigator on C-124 Globemaster transports at Dover AFB, Deleware, from February 1957 to January 1959, and then entered Undergraduate Pilot Training at Bainbridge AFB, Georgia. After receiving his pilot wings in February 1960 and attending combat crew training, Dethlefsen flew F-100 Super Sabres with the 9th Tactical Fighter Squadron at Spangdahlem AB, West Germany, from January 1961 to February 1965. He flew with the 560th Tactical Fighter Squadron at McConnell AFB, Kansas, from February 1965 to October 1966, when he deployed to Southeast Asia. Dethlefsen flew F-105 Thunderchief fighters with the 333rd Tactical Fighter Squadron at Takhli Royal Thai AFB, Thailand, from October 1966 to June 1967. He served as an instructor pilot with the 3575th Pilot Training Squadron and 3576th Student Squadron at Vance AFB, Oklahoma, from June 1967 to August 1971. Dethlefsen next attended Air War College at Maxwell AFB, Alabama, graduating in June 1972. He was then assigned to the Army War College at Carlisle Barracks, Pennsylvania, from June 1972 to 1974. Dethlefsen then became assistant director of operations for the SR-71 wing at Beale AFB, California, before serving as director of operations for the B-52 wing at Dyess AFB, Texas, from 1975 until his retirement from the Air Force on July 31, 1977. Merlyn Dethlefsen died on December 14, 1987, and was buried at Arlington National Cemetery.

Maj. Dethlefsen was 1 of a flight of F-105 aircraft engaged in a fire suppression mission designed to destroy a key antiaircraft defensive complex containing surface-to-air missiles (SAM), an exceptionally heavy concentration of antiaircraft artillery, and other automatic weapons. The defensive network was situated to dominate the approach and provide protection to an important North Vietnam industrial center that was scheduled to be attacked by fighter bombers immediately after the strike by Maj. Dethlefsen’s flight. In the initial attack on the defensive complex the lead aircraft was crippled, and Maj. Dethlefsen’s aircraft was extensively damaged by the intense enemy fire. Realizing that the success of the impending fighter bomber attack on the center now depended on his ability to effectively suppress the defensive fire, Maj. Dethlefsen ignored the enemy’s overwhelming firepower and the damage to his aircraft and pressed his attack. Despite a continuing hail of antiaircraft fire, deadly surface-to-air missiles, and counterattacks by MIG interceptors, Maj. Dethlefsen flew repeated close range strikes to silence the enemy defensive positions with bombs and cannon fire. His action in rendering ineffective the defensive SAM and antiaircraft artillery sites enabled the ensuing fighter bombers to strike successfully the important industrial target without loss or damage to their aircraft, thereby appreciably reducing the enemy’s ability to provide essential war material. Maj. Dethlefsen’s consummate skill and selfless dedication to this significant mission were in keeping with the highest traditions of the U.S. Air Force and reflect great credit upon himself and the Armed Forces of his country.