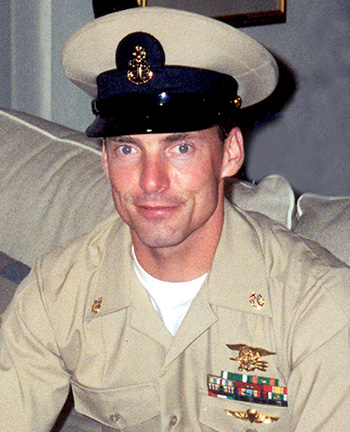 Matthew Bourgeois was born on January 18, 1967, in Tallahassee, Florida. He enlisted in the Florida Army National Guard in 1984 and served until enlisting in the U.S. Navy on August 18, 1987. Bourgeois completed Navy basic training at NTC Orlando, Florida, in October 1987, and then completed Hospital Corpsman school at NTC San Diego, California, in January 1988. He next attended Basic Underwater Demolition/SEAL training at NAB Coronado, California, from January 1988 to October 1989, followed by Basic Parachutist training at Fort Benning, Georgia, in November and December 1989. His first assignment was with SEAL Team TWO at NAB Little Creek, Virginia, from December 1989 to January 1994, and during this time he deployed in support of Operation Desert Storm in 1991. After additional training, Petty Officer Bourgeois served with SEAL Team ONE at NAB Coronado from May 1995 to May 1999, and then with the Naval Special Warfare Development Group at Dam Neck, Virginia, from May 1999 until he was killed in action after stepping on a land mine while deployed to Afghanistan on March 28, 2002.

I am a United States Sailor.

I will support and defend the Constitution of the United States of America and I will obey the orders of those appointed over me.

I represent the fighting spirit of the Navy and those who have gone before me to defend freedom and democracy around the world.

I proudly serve my country’s Navy combat team with Honor, Courage and Commitment.

I am committed to excellence and the fair treatment of all.