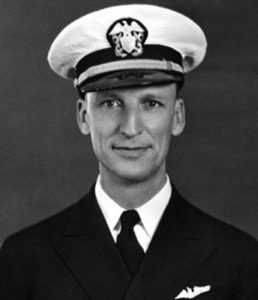 Jim Abele was born on July 11, 1903, in Quincy, Massachusetts. He enlisted in the U.S. Navy on August 12, 1920, and after completing training at Newport, Rhode Island, he was assigned to the battleship USS Utah (BB-31) until December 1921. Abele entered the U.S. Naval Academy in June 1922, and graduated with a commission as an Ensign on June 3, 1926. His first assignment after graduation was as a gunnery officer aboard the battleship USS Colorado (BB-45) from June 1926 to January 1927, followed by service with the Marine Division in Nicaragua from January 1927 to December 1928. LT Abele next completed submarine training at the Submarine School at New London, Connecticut, in December 1929. His first submarine assignment was aboard the USS S-23 (SS-128) from December 1929 to April 1933, followed by service in the Office of the Bureau of Navigation in Washington, D.C., from April 1933 to June 1936. His next assignment was aboard the USS R-11 (SS-88) from June 1936 to January 1937, before taking command of the USS R-13 (SS-90) in February 1937. LCDR Abele then served as Commanding Officer of the submarine USS S-31 (SS-136), followed by service as Commanding Officer of the submarine USS Grunion (SS-216) from her commissioning on April 11, 1942, until he was killed in action during a confrontation with the armed Japanese freighter Kano Maru on July 30, 1942. On August 22, 2007, a search team organized by the three sons of CDR Abele used a remotely operated vehicle to find a sunken vessel 3,000 feet down in the Bering Sea north of Kiska Island at the tip of the Aleutian Islands. On October 1, 2008, the U.S. Navy announced that the sunken vessel is the World War II submarine USS Grunion (SS-216).

For extraordinary heroism in the line of his profession as Commanding Officer of the U.S.S. GRUNION (SS-216), during its FIRST War Patrol, in Alaskan Waters. Lieutenant Commander Abele conducted an aggressive and successful submarine war patrol from 30 June 1942 to 24 July 1942. He pressed home all attacks in such a skillful and resolute manner that he attacked and sank in one day, three enemy destroyers of the Towlekju Class. Despite severe anti-submarine measures, Lieutenant Commander Abele brought his ship safely through these counter attacks but was subsequently lost from an unknown cause. His courage and devotion to duty were in keeping with the highest traditions of the Naval Service. He gallantly gave his life for his country. 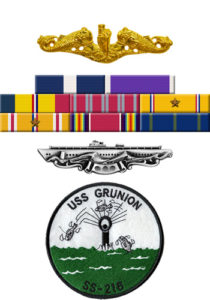