You are here: Home › Tributes › #imnohero: Lloyd Burke, US Army Medal of Honor 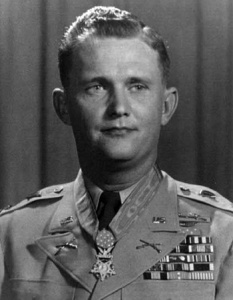 Lloyd Burke was born on September 29, 1924, in Tichnor, Arkansas. He enlisted in the U.S. Army on April 1, 1943, and served as a combat engineer in Italy during World War II. He received an honorable discharge from the Army on January 28, 1946, and was commissioned a 2LT of Infantry through the Army ROTC program at Henderson State University on June 17, 1950. He went to Korea in November 1950, where he served in combat as Commander of Company G, 2nd Battalion, 5th Cavalry Regiment, 1st Cavalry Division. After returning from Korea, Burke served as an Instructor at the Infantry School at Fort Benning, Georgia, from April 1952 to July 1955. He then served as a Company Commander with the 13th Infantry Regiment at Fort Carson, Colorado, and then in Europe, and finally at Fort Riley, Kansas, from July 1956 to April 1959. Burke served as an Assistant Information Officer with the 1st Infantry Division at Fort Riley from April to August 1959, and then attended Command and General Staff School from August 1959 to June 1960. He then served as a Staff Officer at the Pentagon from July 1960 to June 1964, before taking command of the 2nd Battalion, 16th Infantry Regiment, 1st Infantry Division at Fort Riley in July 1964. Col Burke deployed with the Battalion to Southeast Asia in June 1965 and he was badly injured when the helicopter he was flying on was shot down on July 22, 1965. After a lengthy hospitalization, Col Burke attended the National War College at Washington, D.C., from August 1966 to June 1967, and then served as Deputy Chief and then Chief of the Army House Liaison Division with the Legislative Liaison Office under the Secretary of the Army from June 1967 until his retirement from the Army on June 30, 1978. Lloyd Burke died on June 1, 1999, and was buried at Arlington National Cemetery.

1st Lt. Burke, distinguished himself by conspicuous gallantry and outstanding courage above and beyond the call of duty in action against the enemy. Intense enemy fire had pinned down leading elements of his company committed to secure commanding ground when 1st Lt. Burke left the command post to rally and urge the men to follow him toward 3 bunkers impeding the advance. Dashing to an exposed vantage point he threw several grenades at the bunkers, then, returning for an Ml rifle and adapter, he made a lone assault, wiping out the position and killing the crew. Closing on the center bunker he lobbed grenades through the opening and, with his pistol, killed 3 of its occupants attempting to surround him. Ordering his men forward he charged the third emplacement, catching several grenades in midair and hurling them back at the enemy. Inspired by his display of valor his men stormed forward, overran the hostile position, but were again pinned down by increased fire. Securing a light machinegun and 3 boxes of ammunition, 1st Lt. Burke dashed through the impact area to an open knoll, set up his gun and poured a crippling fire into the ranks of the enemy, killing approximately 75. Although wounded, he ordered more ammunition, reloading and destroying 2 mortar emplacements and a machinegun position with his accurate fire. Cradling the weapon in his arms he then led his men forward, killing some 25 more of the retreating enemy and securing the objective. 1st Lt. Burke’s heroic action and daring exploits inspired his small force of 35 troops. His unflinching courage and outstanding leadership reflect the highest credit upon himself, the infantry, and the U.S. Army.