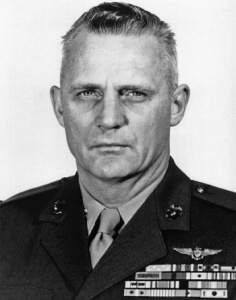 Ken Walsh was born on November 24, 1916, in Brooklyn, New York. He enlisted in the U.S. Marine Corps on December 15, 1933, and served as an aircraft mechanic and radioman before entering flight training at NAS Pensacola, Florida, on March 18, 1936. Walsh was designated a Naval Aviator on April 26, 1937, and was promoted to the rank of Aviation Corporal, making him part of a rare group of enlisted pilots that served in the Marine Corps before and during World War II. He served in scout and observation squadrons with the 1st Marine Aircraft Wing from April 1937 to December 1941, followed by service with VMF-121 at New Bern, North Carolina, from December 1941 to May 1942. His next assignment was with VMF-122 from May to October 1942, and then he received a commission as a 2d Lt and joined VMF-124, moving with the squadron to Guadalcanal in February 1943. Between April and August 1943, Lt Walsh was credited with the destruction of 20 enemy aircraft in aerial combat plus 2 probables and 1 damaged, all while flying the F4U Corsair. He returned to the U.S. in October 1943, and served at Headquarters U.S. Marine Corps in Washington, D.C., until January 1944, when he went to NAS Jacksonville, Florida. Capt Walsh served as an instructor pilot until March 1945, and then served with VMF-222 in the Pacific from April to September 1945, during which time he added 1 air victory to his record, giving him 21 total in WWII. Walsh returned to the U.S. in November 1945, and served in the Bureau of Aeronautics at Headquarters U.S. Marine Corps in the Pentagon from March 1946 to November 1948. He served at MCAS El Toro, California, from January to June 1949, and then at MCAS Quantico, Virginia, until May 1950. Capt Walsh served with VMR-152 in Korea from June 1950 to July 1951, followed by service with VMR-352 at MCAS El Toro from July 1951 to March 1952. Maj Walsh next served on the staff of the Commander Air Force, U.S. Atlantic Fleet, at Norfolk, Virginia, from April 1952 to August 1955, and then went back to VMR-152 at MCAS El Toro until December 1958. His next assignment was with the 1st Marine Aircraft Wing at MCAS Futenma, Okinawa, from January 1959 to April 1960, followed by service with Marine Wing Support Group 37 at MCAS El Toro from May 1960 until his retirement from the Marine Corps on February 1, 1962. Ken Walsh died on July 30, 1998, and was buried at Arlington National Cemetery.

For extraordinary heroism and intrepidity above and beyond the call of duty as a pilot in Marine Fighting Squadron 124 in aerial combat against enemy Japanese forces in the Solomon Islands area. Determined to thwart the enemy’s attempt to bomb Allied ground forces and shipping at Vella Lavella on 15 August 1943, 1st Lt. Walsh repeatedly dived his plane into an enemy formation outnumbering his own division 6 to 1 and, although his plane was hit numerous times, shot down 2 Japanese dive bombers and 1 fighter. After developing engine trouble on 30 August during a vital escort mission, 1st Lt. Walsh landed his mechanically disabled plane at Munda, quickly replaced it with another, and proceeded to rejoin his flight over Kahili. Separated from his escort group when he encountered approximately 50 Japanese Zeros, he unhesitatingly attacked, striking with relentless fury in his lone battle against a powerful force. He destroyed 4 hostile fighters before cannon shellfire forced him to make a dead-stick landing off Vella Lavella where he was later picked up. His valiant leadership and his daring skill as a flier served as a source of confidence and inspiration to his fellow pilots and reflect the highest credit upon the U.S. Naval Service.