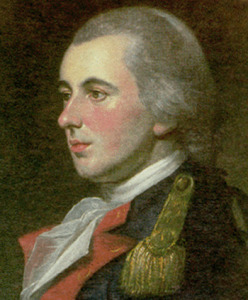 Joshua Barney was born on July 6, 1759, in Baltimore, Maryland. He enlisted in the Continental Navy in February 1776, and served aboard the cruiser Hornet, the schooner Wasp, and the sloop Sachem before being captured and taken as a Prisoner of War in late 1776, and exchanged in early 1777. During this time he was commissioned a Lieutenant for gallantry in action, and took part in the defense of the Delaware aboard the Andrew Doria in the spring of 1777, before serving aboard the frigate Virginia and again being captured in March 1778. Lt Barney was again exchanged in August 1778, and was captured and exchanged in 1779 before serving aboard the sloop-of-war Saratoga, again being captured in late 1779. He was held by the British until escaping in May 1781, and although he was recaptured, he escaped again, making his way back to Philadelphia in March 1782. Barney was put in command of the Hyder Ally and after capturing the British sloop-of-war General Monk in April 1782, he was put in command of that ship. Capt Barney sailed for France in November 1782, and returned with the information about the peace treaty ending the Revolutionary War. After the war, he left the Continental Navy and engaged in commerce in the West, and was captured by an English brig and imprisoned as a pirate in 1793. He was released and joined the French Navy in 1794 and was made commander of a squadron before resigning and returning to the United States in 1800. Barney was commissioned a Captain in the U.S. Navy on April 24, 1814, and commanded the flotilla for the defense of Chesapeake Bay. He was wounded and taken prisoner during the Battle of Bladensburg in August 1814, and after his release he served on a mission to Europe until October 1815, when he returned to the U.S. due to complications from a wound he received at Bladensburg. Commodore Barney then left the Navy and died from his wounds on December 1, 1818. He is buried at the Allegheny Cemetery in Pittsburgh, Pennsylvania. Four U.S. Navy ships have been named for him: the ferryboat USS Commodore Barney, the torpedo boat USS Barney (TB-25), the destroyer USS Barney (DD-149), and the guided missile destroyer USS Barney (DDG-6).