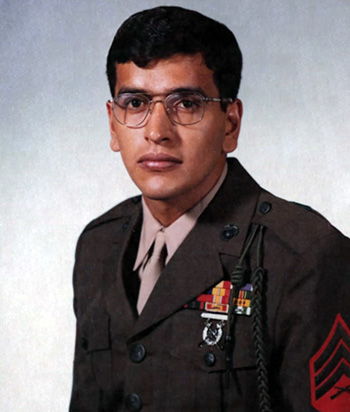 Joe Anzaldua was born in 1950 in Texas. He enlisted in the U.S. Marine Corps on June 11, 1968, and completed basic training at MCRD San Diego, California, in August 1968. Pvt Anzaldua then received infantry training and replacement company training at MCB Camp Pendleton, California, from August to December 1968, followed by Vietnamese language training at the Presidio of Monterey, California, from December 1968 to March 1969. His next assignment was as a Squad Leader and Infantry Scout with Headquarters Company, 2nd Battalion, 5th Marine Regiment of the 1st Marine Division in South Vietnam from March 1969 until he was captured and taken as a Prisoner of War on January 23, 1970. After spending 1,160 days in captivity, Sgt Anzaldua was released during Operation Homecoming on March 27, 1973. He was briefly hospitalized to recover from his injuries at the U.S. Naval Hospital at Camp Pendleton, followed by Officer Candidate School at MCB Quantico, Virginia, from March 1974 until he was commissioned a 2d Lt in the Marine Corps on December 20, 1974. Lt Anzaldua attended the Basic School at Quantico from December 1974 to July 1975, and then served as a Platoon Commander with Company L, 3rd Battalion, 1st Marine Regiment of the 1st Marine Division at Camp Pendleton from August 1975 to March 1976. His next assignment was as an Embarkation Officer and Logistics Officer with Headquarters Company, 1st Marine Regiment at Camp Pendleton from March 1976 to August 1977, followed by service as Operations Officer with the 6th Marine Corps District, Recruiting Station Atlanta, Georgia, from September 1977 to December 1979. Capt Anzaldua served as Chief of the Test Management Section and as Operations Officer at Military Entrance Processing Station Raleigh, North Carolina, from December 1979 to June 1982, and then as Supply Services Officer with Headquarters Battalion of the 2nd Marine Division at MCB Camp Lejeune, North Carolina, from September 1982 to October 1985. Maj Anzaldua next served as Motor Transport Officer with Headquarters Battalion of the 1st Marine Division at Camp Pendleton from November 1985 to June 1988, followed by service as Motor Transport Officer with the Logistics Department at Camp Lejuene from August 1988 until his retirement from the Marine Corps on October 1, 1992.

For heroism while serving with the Second Battalion, Fifth Marines, First Marine Division in the Republic of Vietnam. On the night of 7 December 1969, Corporal ANZALDUA was at his battalion’s command post in Quang Nam Province when he observed a helicopter crash near the battalion landing zone. Reacting instantly, he ran to the burning aircraft and began assisting the shocked and injured passengers to safety. Upon being informed by the pilot that the crew chief was missing, he disregarded the explosions from the burning ammunition inside the aircraft and fearlessly entered the flaming wreckage through the rear section. Finding the crew chief pinned under several pieces of heavy debris, and although painfully burned himself, Corporal ANZALDUA, with assistance of two other Marines, freed the injured man and moved him to an area where he could receive proper medical aid. Refusing treatment himself, he reentered the blazing helicopter and freed a Vietnamese civilian, who was trapped under some fallen equipment. Corporal ANZALDUA’s bold and courageous actions in the face of great personal danger were instrumental in saving the lives of at least two men and were in keeping with the highest traditions of the Marine Corps and of the United States Naval Service.