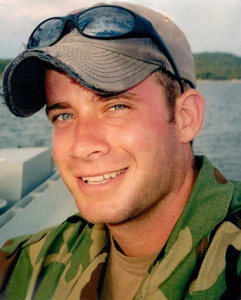 Jonas Kelsall was born on November 8, 1978, in Shreveport, Louisiana. He enlisted in the U.S. Navy in September 1996, and graduated from basic training at NTC Great Lakes, Illinois, in December 1996. After completing A School training, Petty Officer Kelsall attended Basic Underwater Demolition/SEAL training at NAB Coronado, California, from February to August 1997. He then received an assignment to complete his bachelor’s degree and attend Navy ROTC at the University of Texas from August 1997 until he was commissioned an Ensign in the U.S. Navy in May 2001. After completing additional training he served with SEAL Team SEVEN at NAB Coronado until May 2008. LCDR Kelsall’s final assignment was with Naval Special Warfare Development Group (DEVGRU) at Dam Neck, Virginia, from May 2008 until he was killed in action when the CH-47 Chinook helicopter he was aboard was shot down in Afghanistan on August 6, 2011. He was buried at Arlington National Cemetery.

For heroic achievement in connection with combat operations against the enemy as a Troop Commander for a Joint Task Force in support of Operation ENDURING FREEDOM from 23 February 2010 to 1 July 2010. During this period, Lieutenant Commander Kelsall consistently exposed himself to enemy fire while leading his force on several direct action raids that resulted in the elimination of numerous enemy insurgents and the detention of many others. On 17 March 2010, during a daring nighttime raid, his assault force quickly eliminated the targeted individual as his position came under heavy automatic weapons fire from multiple directions. As several of his teammates sustained gunshot wounds, Lieutenant Commander Kelsall decisively ordered his assault force to exfiltrate while he prepared to suppress the enemy fighters with close air support. Remaining exposed to an ever-increasing volume of enemy gunfire, he coordinated with multiple air assets to synchronize the timing and location of the assault force’s extraction, while laser designating targets to be engaged by aircraft. His superior leadership throughout the firefight resulted in the elimination of the enemy commander and ensured his assault force’s safe extraction from enemy territory. By his extraordinary guidance, zealous initiative, and total dedication to duty, Lieutenant Commander Kelsall reflected great credit upon himself and upheld the highest traditions of the United States Naval Service.